Marrow Shards -> Bones of the Follower : How to use it well? 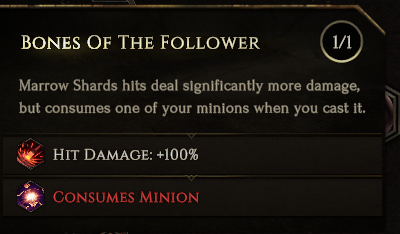 This skill is original.
Either you have minion or not, you get +100 % hit damages.

Two choices to exploit it:

The only self minion who ressurect, it’s the Skeleton (they can self ressurect at a 40 % rate max).

But is it possible to increase this rate with an Idol for exemple?

If not, this skill is just too hard to use well with Minions.

I did experiment with this a little bit some days ago.
I played a (mostly) temporary summoner with alot of wraith’s(summon as many as possible at the same time), skeletons(self ress node + summon multiple per summon) and the summon putrid wraith nodes from both necromancer and lich tree.

Basically all my minions were “expandable” and i did alot of spell/casting damage by myself, basically i was half-caster, half-summoner.

I also did use chain-sacrifice as strong burst which basically cleared the WHOLE screen and destroyed all my minions.

It is definitely another kind of “summoner” playstyle, very interactive and you Always have to think do i need sustained dmg now(marrow shard) or do i need burst(sacrifice)

Keeper’s Gloves summon up to 8 bees with an 8 second cooldown, I wonder if there’s a good way to use the bees to feed the shards.