Deep within the Temple of Eterra lie the remains of the Immortal Emperor. How he came to rest here is unknown, but what is certain is that there is no hint of his soul left in this shattered body… only the darkness of the Void.

In Patch 0.8.2, alongside Shade of Orobyss, another imposing adversary entered the World of Eterra - Emperor’s Remains. We feel he was a bit overshadowed by Shade (pun intended) but also one of the more interesting encounters we have created, so let’s give him a proper introduction!

For the Emperor’s Remains fight we wanted to make sure the Temple of Eterra culminated in a fight that would compliment the majesticness of the temple. We asked one of our phenomenal concept artists to come up with designs that would be a fusion of the Immortal Emperor and a void creature.

We went through several iterations before settling on the final design. It was a fun challenge to find a good balance between bone and void, while also making the boss look intimidating and threatening. In the end though, we arrived at a very cool place with an incredible looking boss! 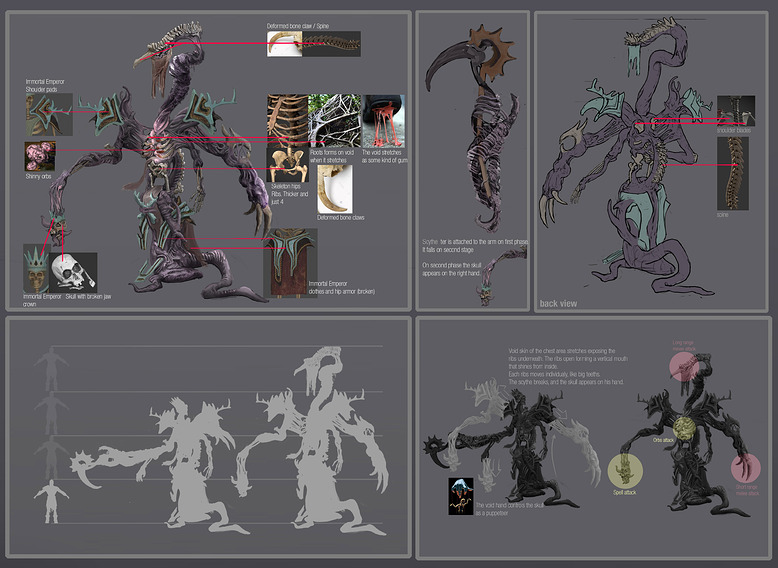 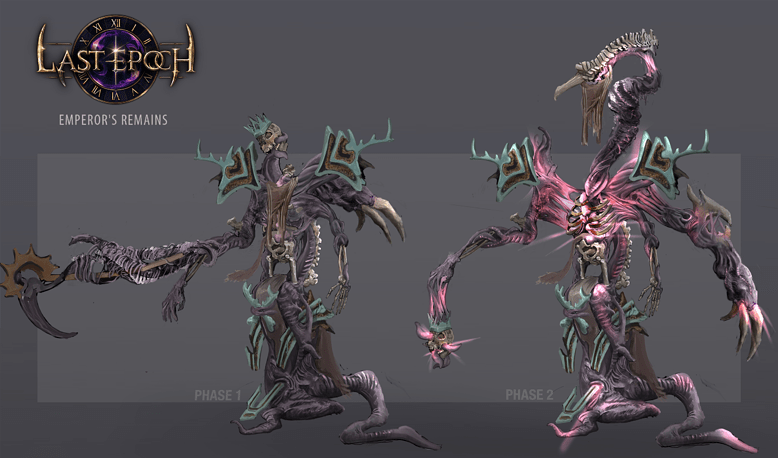 Once the team was happy with the conceptual design and monster look, we handed the project over to our 3D modelers to work their magic. They started with sculpting a high poly model and then created a model for the game with a lower polygon count, all while maintaining the eeriness and sense of the void. The next step was to create materials for different parts of the model and create a rig, which is basically bone structure. The rig moves and manipulates different part of the monster, so our animators can hop in and truly bring the monster to life. 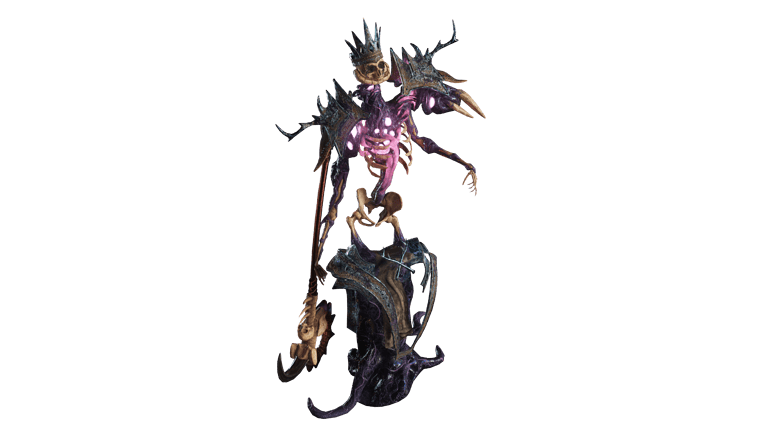 The phase change was inspired from the concept art and our desire to make the fight more interesting and memorable. There are a few mechanical differences between the phases, mainly revolving around the boss losing its scythe and needing to resort to more chaotic void magic. Overall, we wanted to make an exciting early game boss that was not too difficult but still awesome to battle.

We decided not having legs or any sort of way to move naturally would make for a unique and supernatural encounter. This left us with two options: a stationary boss or a boss that teleported around the arena. Considering we didn't have a stationary boss in the game yet, we decided this would make the most sense. With this constraint in mind, all of his attacks revolved around this concept and needed to work with a boss who is always in the center of the room.

In most of our boss fights we like to include multiple damage sources the player has to dodge and play around at once. Some examples are additional monsters, environment effects, or more specific things such as the Ballistae when fighting Argentus. These challenges help raise the intensity and randomness of the fight, which often is a good thing. For the Emperor's Remains fight, we still wanted to capture that feeling of chaos without it being too over the top like an end-game or later game boss might be. The solution we settled on is the eyeball summons. They emerge and attack the players but can be eliminated to make the fight easier. This makes them an interesting hazard while not being too brutal.

Sound and music are a big part of the game, environment, monsters and encounter design. It helps give our monsters character and convey the right emotions to players. Sometimes we want to highlight the depressive atmosphere of the environment or get the adrenaline pumping during the boss encounter. We are fortunate to work with talented sound designers and composers to help accomplish these goals. Here are few tidbits about this encounter directly from them.

Sound Design for Emperor's Remains really revolved around the concept that he is a helpless vessel being puppeteered by the void. Lots of bone crunching and wet slithering sounds were used for the transformation event when the second phase begins.

As for the ability sounds, we just wanted them to sound dangerous. From the giant chain falling from the ceiling to the Void whip it all had to be HEAVY!

The end of Chapter 3 culminates with a boss fight against the Emperor’s Remains, and since this chapter is mostly made up of dark ambient music to represent the waste and desolation of the void, we knew the energy had to come in strong for this final zone.

The Emperor’s Remains boss fight actually started with the drums being made first. We layered several different heavy cinematic drum loops and added our own programmable drum midi sequences in to make the percussion sound heavy, full, and energetic. From there we created the staccato (short and sharp) string phrases that can be heard right after the first intro swell.

For boss music it’s important to have a lot of musical interest going on so that way it doesn’t just sound like a wall of noise and fatigue the listener. We tried to achieve this by keeping variety in several different aspects of the music, including instrumentation (everything from French horn to female lead vocals) and several melodic phrases being passed around between the different orchestra sections. We hope you like it and that it gets your heart beating and blood flowing as you crush this boss to complete chapter 3!

It’s always interesting seeing how stuff gets made.

Edit: Was this really posted 14 days ago?

Was this really posted 14 days ago?

There was the same thing with all recent official posts.

Edit: Was this really posted 14 days ago?

We always start drafting our blogs days/weeks in advance, sometimes it takes quite a lot of time to gather all materials from our team - especially for bigger blogs like this one. We also schedule our posts in a way, we won’t throw everything we can talk about at you guys at the same time

The date you see is the date of our first draft.

Majesticness was definitely my decision

This is always most fascinating things to read for me personally. Every company approaches designing so differently learning on how you guys do it really shows us the personality of not just the teams/individual but also the company as a whole. thanks for all your hard work. But also sharing your experiences with us <3

bro you actually went there

Wow! I totally missed this because I only tried the mono endgame for 0.8.2. Will check him out when I made a new char (for multiplayer