I very often have to do 2 or 3 retries to make a sufficiently precise click on an item while continuing to fight and advance. I think this to be one of the most annoying points in my player experience, as it breaks the rhythm of the main action to have to concentrate on a secondary task.

Having a click box wider than the text box (or have a setting to enlarge enough the text itself) would solve this problem.

TBH, I really don’t see making the “box” you have to click on a few pixels wider is going to magically make people decide they don’t mind doing it & thus stop asking for it. Some people just want to sprint through the game with everything happening automagically & the mobs burst into rainbow cascades of pixels (like in certain other aRPGs).

Actually the idea is more to get people to decide they don’t mind stopping playing every 5 seconds to focus on clicking stuff on the floor… but maybe I’m wrong and you’re right and it’s time to take a new step … turn-based hack & slash ! So we really have time to appreciate real and simple things like clicking diligently on each thing!

I would like to see all common/non-class specific runes/glyphs auto-pickup and auto-added_to_crafting_inv. They wanted to retain some thrill factor around acquiring runes/glyphs, but my excitement waned after my 700th cold res glyph, and 500th shatter rune.

You would be surprised honestly.

Having the ability to filter and customize your loot makes you more attached to it and more willing to pick it up.

I think the issue is more a filter/perception issue. I sometimes zone out and dont click shards I want because they are an annoying tiny orange text. If EHG wants them to be items, I want to filter them as such. >:(

I would like to see all common/non-class specific runes/glyphs auto-pickup and auto-added_to_crafting_inv. They wanted to retain some thrill factor around acquiring runes/glyphs, but my excitement waned after my 700th cold res glyph, and 500th shatter rune.

Yes I think that the interest of not automating the collection of craft items has something to do with the excitement of manually picking up those which are rare, and I’m ok with that.

But again my suggestion is not about that but about picking up items globally, I shouldn’t even have mentioned the story of auto picking up glyphs and shards.
what I find boring is sometimes having to try several times to pick up single item because at the same time we are defending/attacking/looking for points of interest on the map… having to stop and concentrating to do that breaks the rhythm, and in my opinion that’s really not what the game needs right now…

So yes the pleasure of looting something rare must remain, making sure that it is not a chore would not harm it, quite the contrary.

I think the issue is more a filter/perception issue. I sometimes zone out and dont click shards I want because they are an annoying tiny orange text.

This is one of my irritants. The filter options are leagues ahead of other games in the genre but lack the most basic side, the crafting “component” side. The same goes for idols, but we know those are one time rolls. I wouldn’t mind having a dungeon that gets a single simple re-roll of existing stats to just improve the values in the range.

I have defined a fairly strict filtering, and even so I know that at least 90% will go directly to the trash because not a good roll etc…
it’s part of this kind of game and even of the fun when you finally discover the one with the right roll of implicits and the right affixes.
But having to stop our progress or back track to pick up something and in most cases say “ok trash…” I’m not maso enough to find that fun

I have defined a fairly strict filtering,

These two statements are pretty close to being mutually exclusive. If you’re tossing 90% of what you see and pick up, your loot filters are not doing as much for you as they need to be. I’m also not really sure why you’re even picking things up when you can just look at the tooltips on the ground, since so much of the unfiltered loot is trash. And…

(or have a setting to enlarge the text itself)

This is already a feature included in the loot filter system, but it seems you may not know it or be using it? So it seems to me there are probably issues with your process and execution.

To be frank, what you’re saying comes off to me like you’re not making an honest suggestion as much as being coy about what you really want, which is some form of autopickup, because you know you’ll get jumped on if you say it outright. Whether or not that’s true, that’s how it sounds when you repeatedly bemoan having to pick up loot in a game that’s about picking up loot.

You’re railing against a pretty fundamental piece of gameplay for any game that has loot in it. There is no change that can be made to eliminate what you don’t like which doesn’t also break the entire core gameplay loop. Loot is going to drop on the ground. You are going to have to “stop your progress” or “back track” if you want to pick it up. There is no way around it.

There may be a point at which you need to consider that a loot hunt focused game is not for you.

Dude learns to read before answering trash, and especially accusing me of dishonesty or whatever.
All I’m suggesting is having the ability to enlarge loot text so you don’t click away in the heat of the moment 1 out of 2 times.
I saw the emphasis option in the filters, thank you for your condescension, it enlarges the text but not the area on which you must click…
I thought that on an early access game I would find an open-minded population, in that I admit that I was seriously mistaken…
Anyway I spent hours on D1 D2 D3, on PoE even more, and other RPGs… so your moral lessons and come and explain to me what it’s for me or not, it’s just pathetic…

Just to come back, if I may, on the subject, the suggestion is to have a configurable option, everyone being free to use it or not.
I don’t see how that encourages people to come and spit their gall here, if it’s not something you would use just move on.

Are you suggesting a hotkey sequence like “control ~” to change text sizes on the fly? If that is what you were meaning, that was not what I got from the original post. So to be direct bronco’s answer is not far off. because you had/have difficulty articulating what you think the problem is as compared to the functioning system, then you start lashing out at him which is against the TOS.

Picking up items has always been a bit ‘wonky.’

I do not want auto-pickup. I’d never ask for that nor do I think it’s even remotely necessary.

But there is still something just not intuitive or ‘quite right’ about picking stuff up now. I’m not sure how to vocalize it but when I click on an item I want, I expect my character to walk towards it or, even better not move at all and just pick it up. But often times, my mouse will click on it and then suddenly my character starts to walk in a "completely random’ direction AWAY from where I just clicked. I immediately react like NO THIS WAY and click back and then it just gets into this loop of not going the right way.

Then you have to make the realization that the stuff on the ground doesn’t EXIST in the actual world your character is in and he has to move to where it actually IS in the program world.

It feels wonky and weird. and it has been more than aggravating at certain times that I will often just stop picking stuff up because it’s not worth it.

I don’t know how to explain it any better. I’ve not experienced that sort of strange ‘maneuvering’ in any other aRPG I’ve played so I don’t really have anything to compare it to.

Purely my user experience of it.

Thank you for your concern, but I got a solid C- in my English classes so I think I’m good.

I saw the emphasis option in the filters, thank you for your condescension, it enlarges the text but not the area on which you must click… 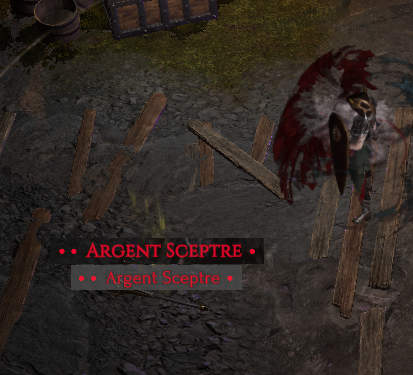 It’s far from perfect in this form and could be simpler but the idea is:

But there is still something just not intuitive or ‘quite right’ about picking stuff up now. I’m not sure how to vocalize it but when I click on an item I want, I expect my character to walk towards it or, even better not move at all and just pick it up. But often times, my mouse will click on it and then suddenly my character starts to walk in a "completely random’ direction AWAY from where I just clicked. I immediately react like NO THIS WAY and click back and then it just gets into this loop of not going the right way.

That kinda sounds like an issue where there are “too many” item ground labels so they have to be spread out which means that the labels away from the middle of the group can be significantly further from where the item is on the ground than those labels in the middle. LE doesn’t dynamically adjust the positioning of the labels like some other games do as you pick gear up but it will if you turn the ground labels off then on again.

This used to be most obviously a problem in the Lightless Arbour reward room if you went nuts picking options before they were capped.

That doesn’t change the size of the box though, only whether the text is capitalised (with the occasional replacement of the name with a random ASCII string just for funzies).

That doesn’t change the size of the box though

Those boxes are two different sizes.

They are the same height, the emphasised one is obviously wider (approx 214 pixels v 175 from the snip I took)… Given ground labels are wider than higher the most effective way to make it easier to click on would be to make it taller rather than making it wider & that’s not what the emphasis loot filter effect does.

Technically it’s one pixel taller, which would normally be super pedantic but OP did suggest 2-3 pixels in difference. But, more importantly, the ask in the OP was only for more width, and the point was that the Emphasis option does that already as a natural consequence of its function.

Yeah, they’ve talked before about why it happens.

Regardless, it still feels wonky the way picking up gear currently occurs. If you get a horde of shards littering the ground (not just gear) it still happens as well. Always feels a bit ‘off’ to me. Not terrible, mind you, but personally it doesn’t quite work.