I’ve been playing Spellblade since 0.7.8 and began working on this build in 0.7.9 and now refining it a bit in 0.7.10. It’s pretty solid in Arena (wave 235 atm, mainly dying to my own lack of skill and sub-optimal gear) and is a fun build through Monoliths.

The main philosophy is to use Teleport offensively by boosting it with Elemental Nova, so we can jump right into the middle of packs and let loose freezing hell using Shatter Strike as main damage and Mana Strike for mana regen. 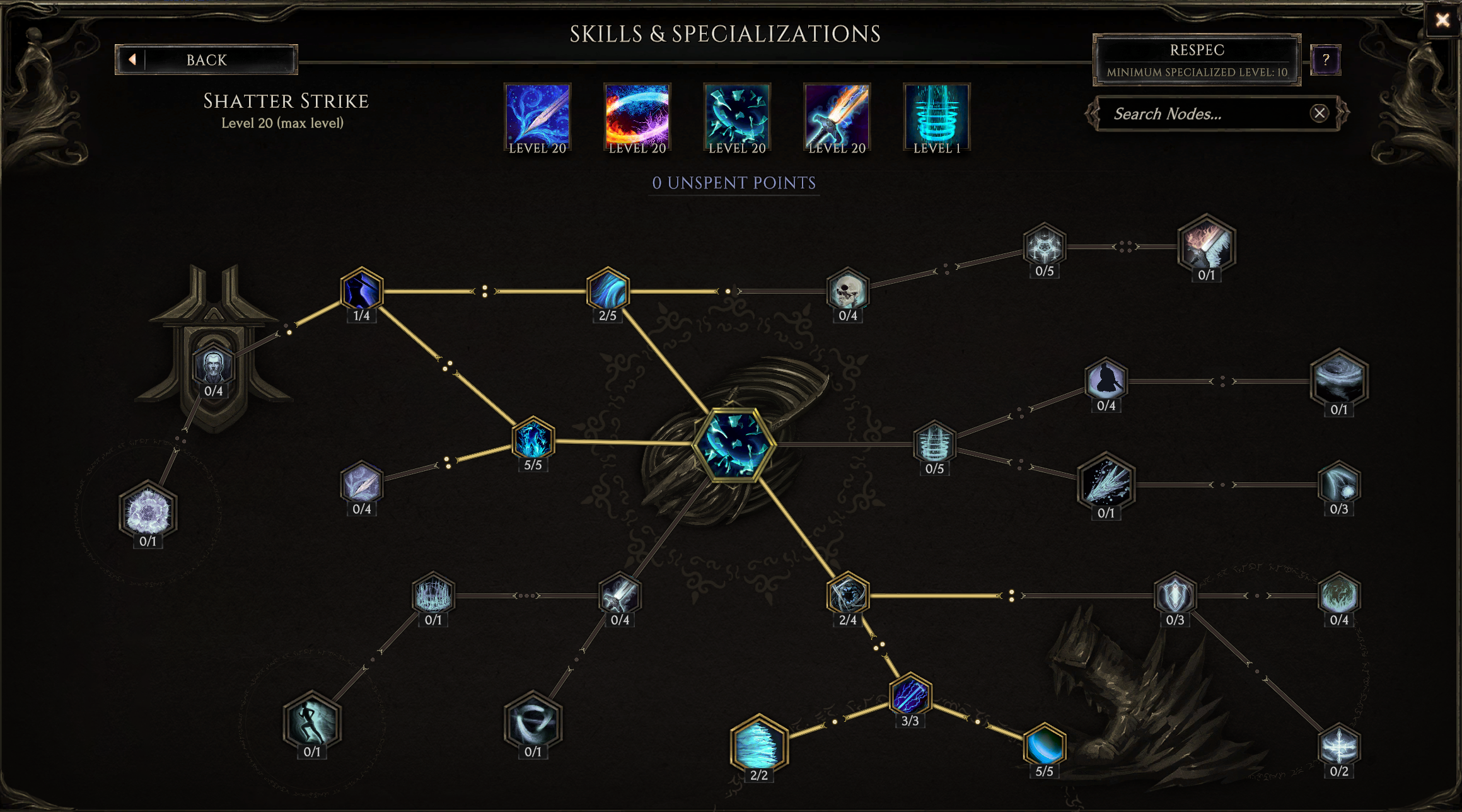 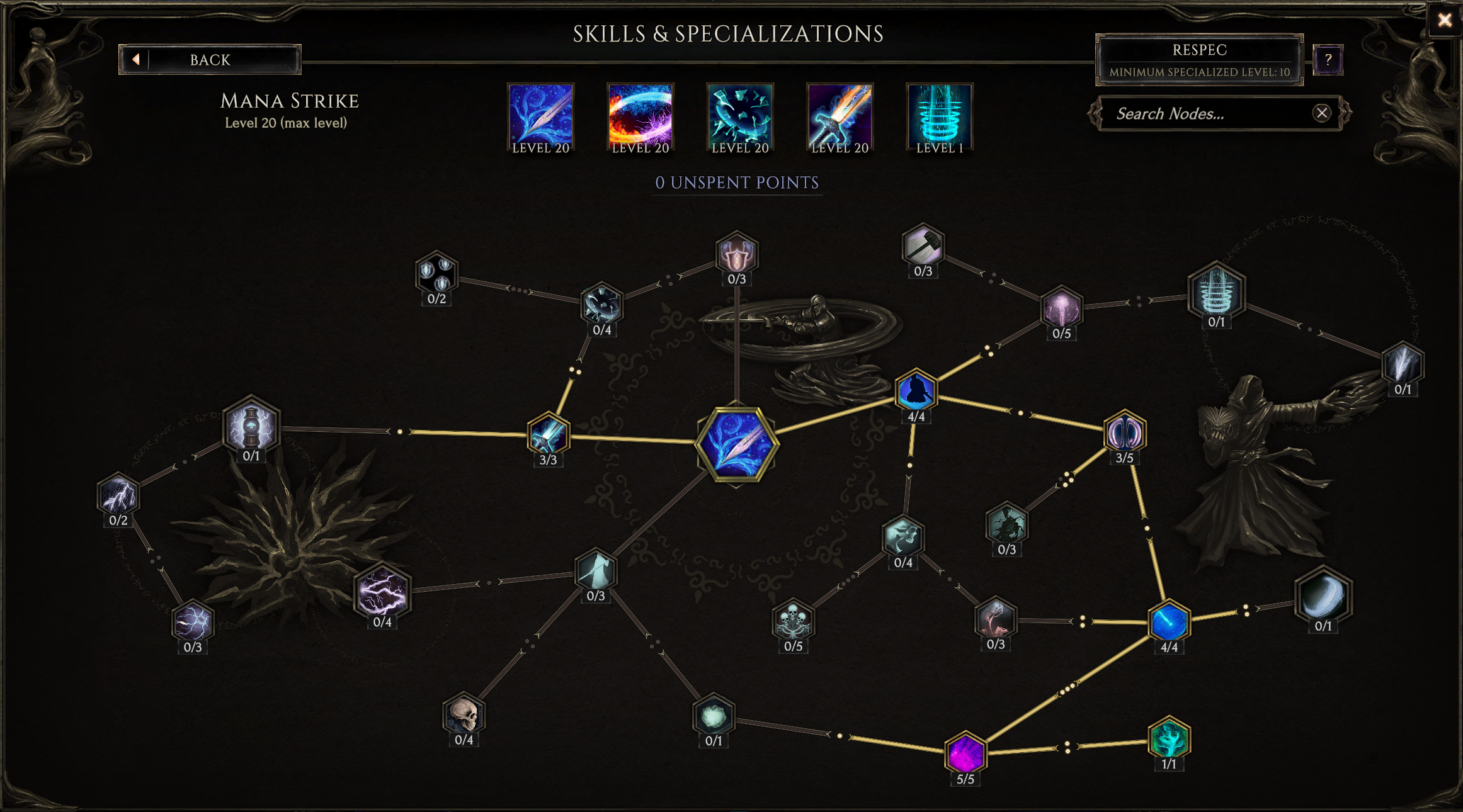 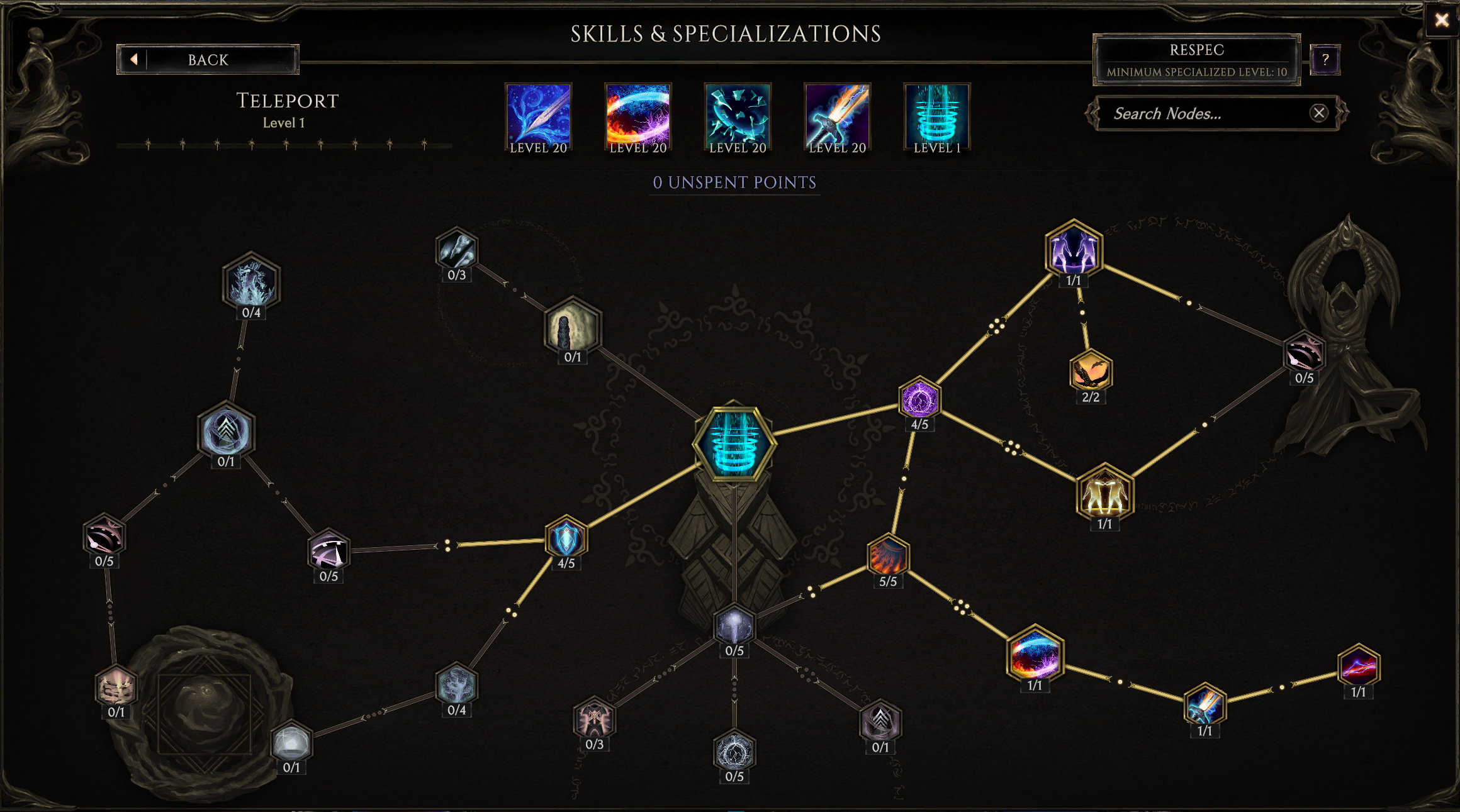 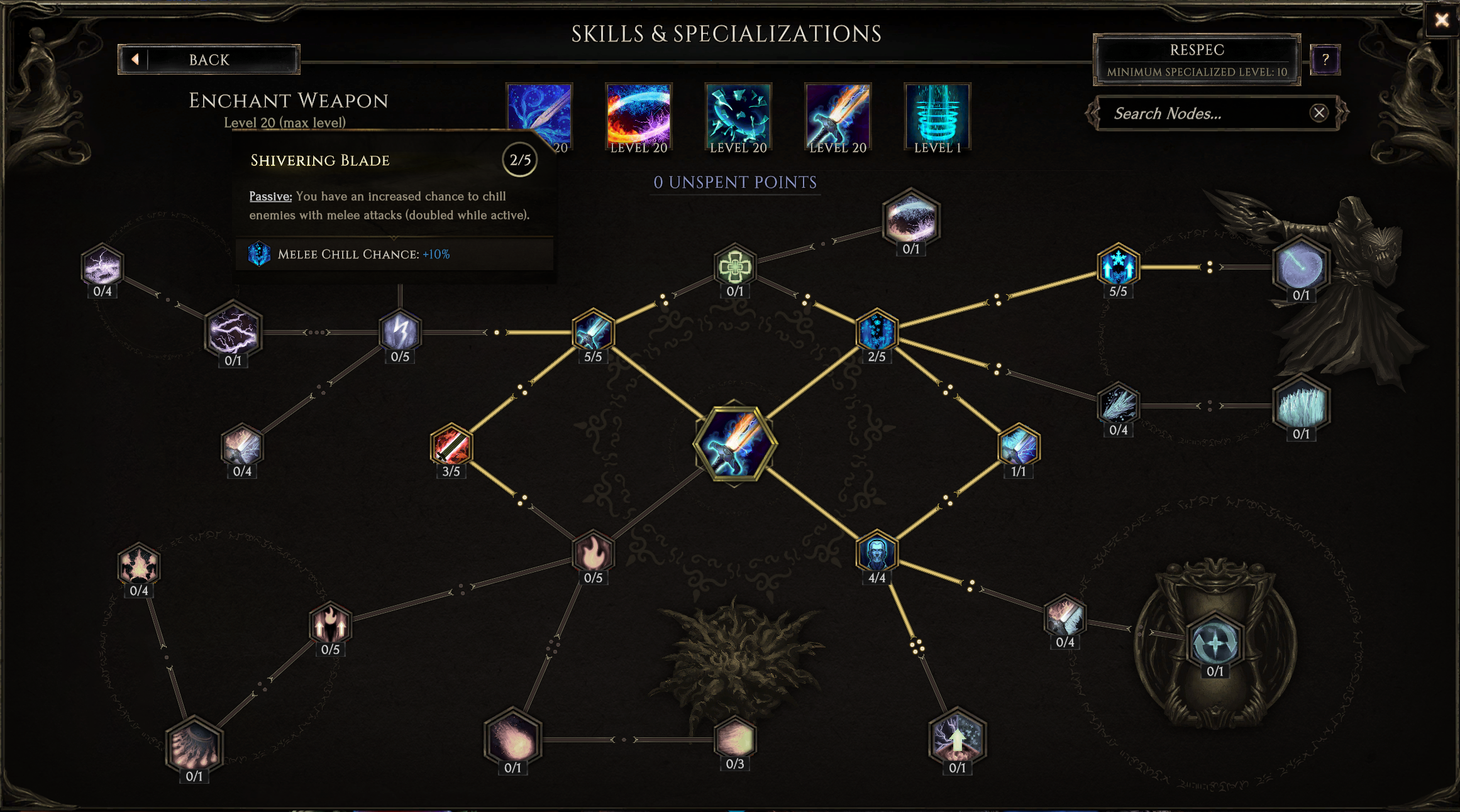 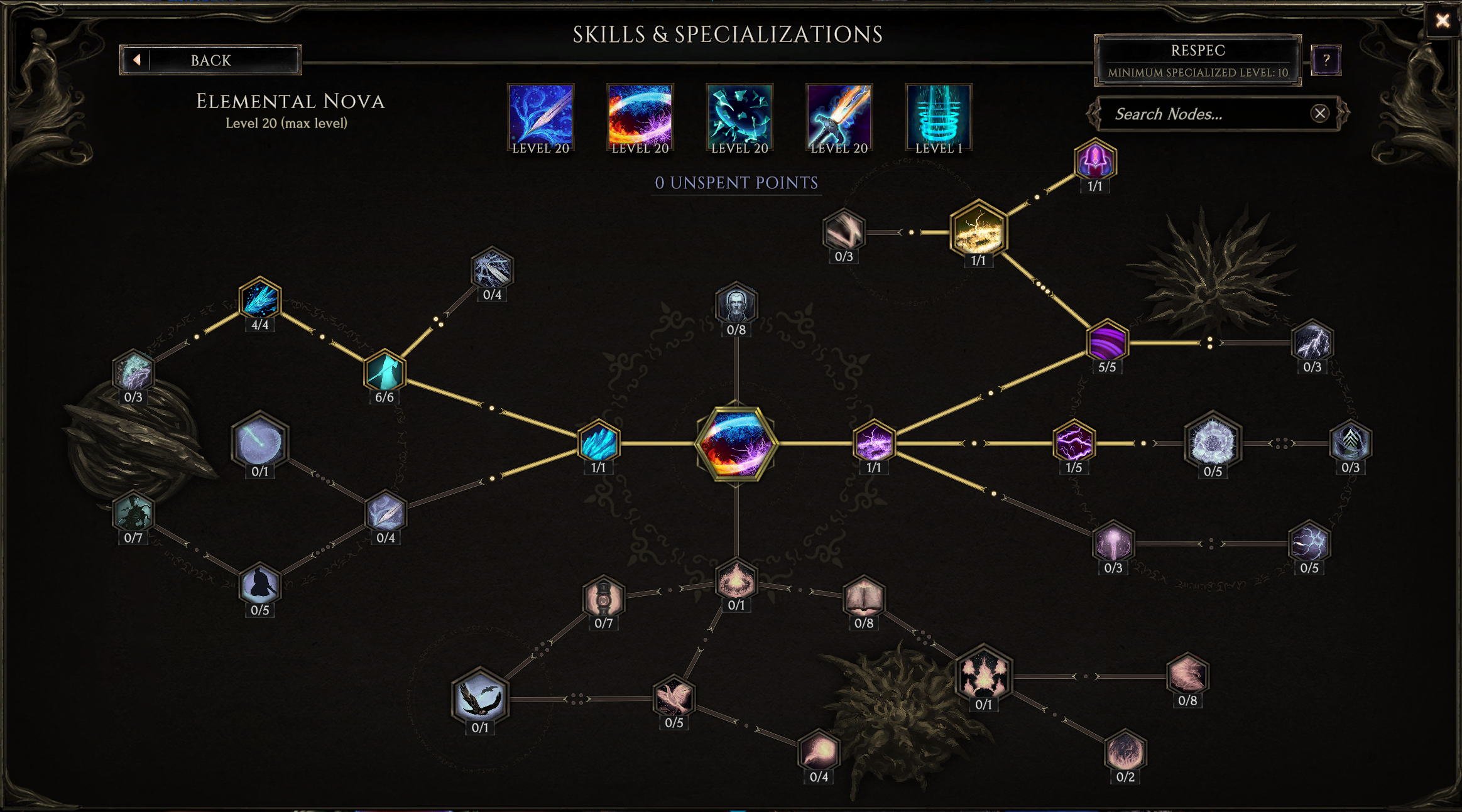 Shatter Strike is specced for max area to hit as many mobs as possible, and it also turns it into a “semi-ranged” attack as you can hit mobs from a little bit further away which can really help sometimes. The cold penetration is also ok.

Mana Strike is specced for max mana and high crit chance. Using Eye of Reen in Arena means the ignites and crit bonuses stack very quickly, but I prefer Shard of the Shattered Lance for Monoliths as mobs die so quickly that Reen never stacks quick enough.

Teleport is specced for extra damage and the Elemental Nova nodes.

Elemental Nova does not need to be in your skill bar, so add Flame Ward for the base stats of 400 ward and 30% damage reduction for 3 seconds. There is still a big boost from this skill even at it’s base and can still be very useful … oh, and did I forget to mention … it’s free!

You can play around with nodes in Shatter Strike and Mana Strike to suit your needs and playstyle, but there’s not much node flexibility in the other 3 skills. Elemental Nova can be respecced for Spreading Frost (4 points needed) by juggling other nodes, but Spreading Frost can have a huge negative impact on fps dropping to zero so I don’t use it for now. 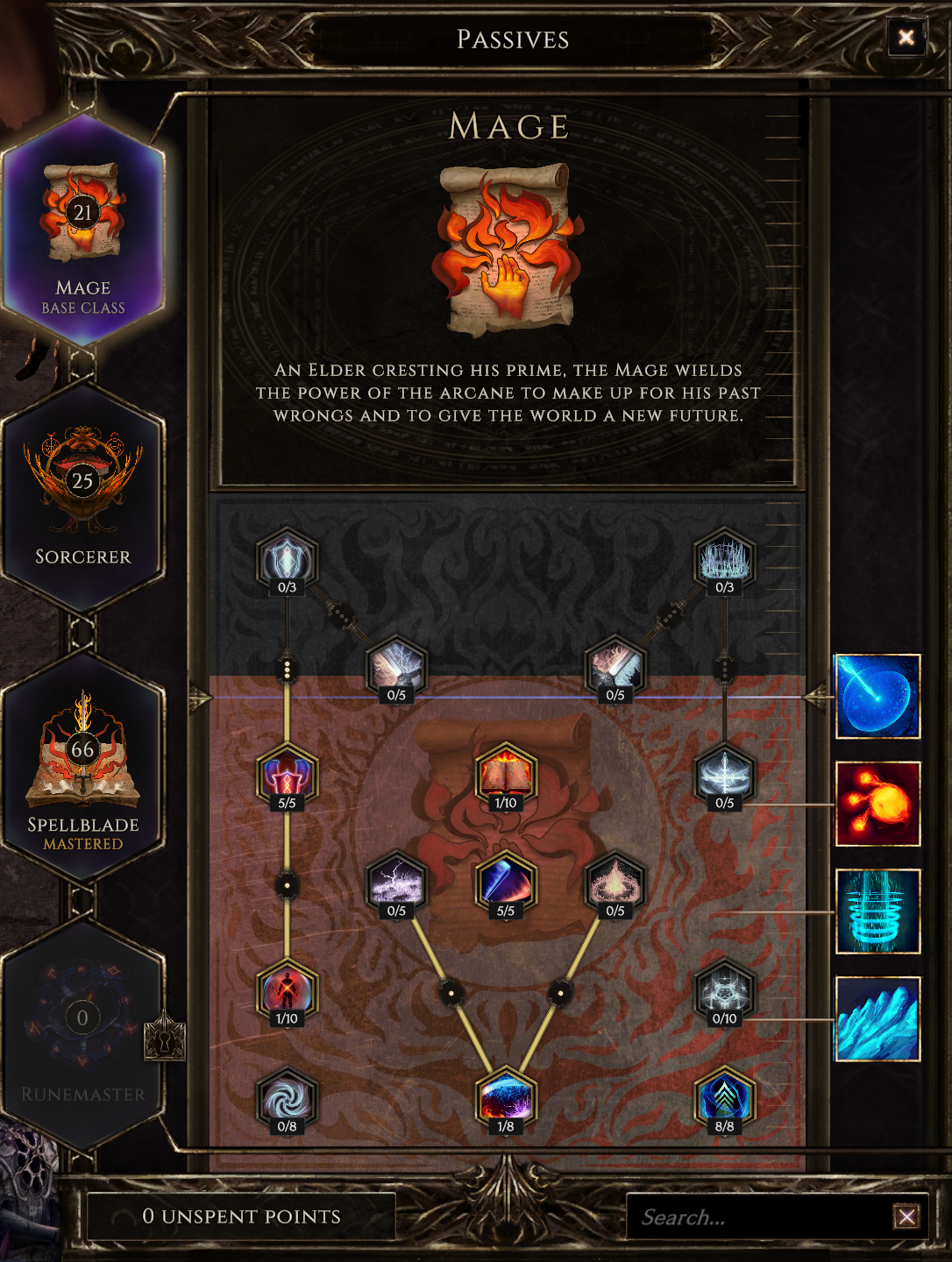 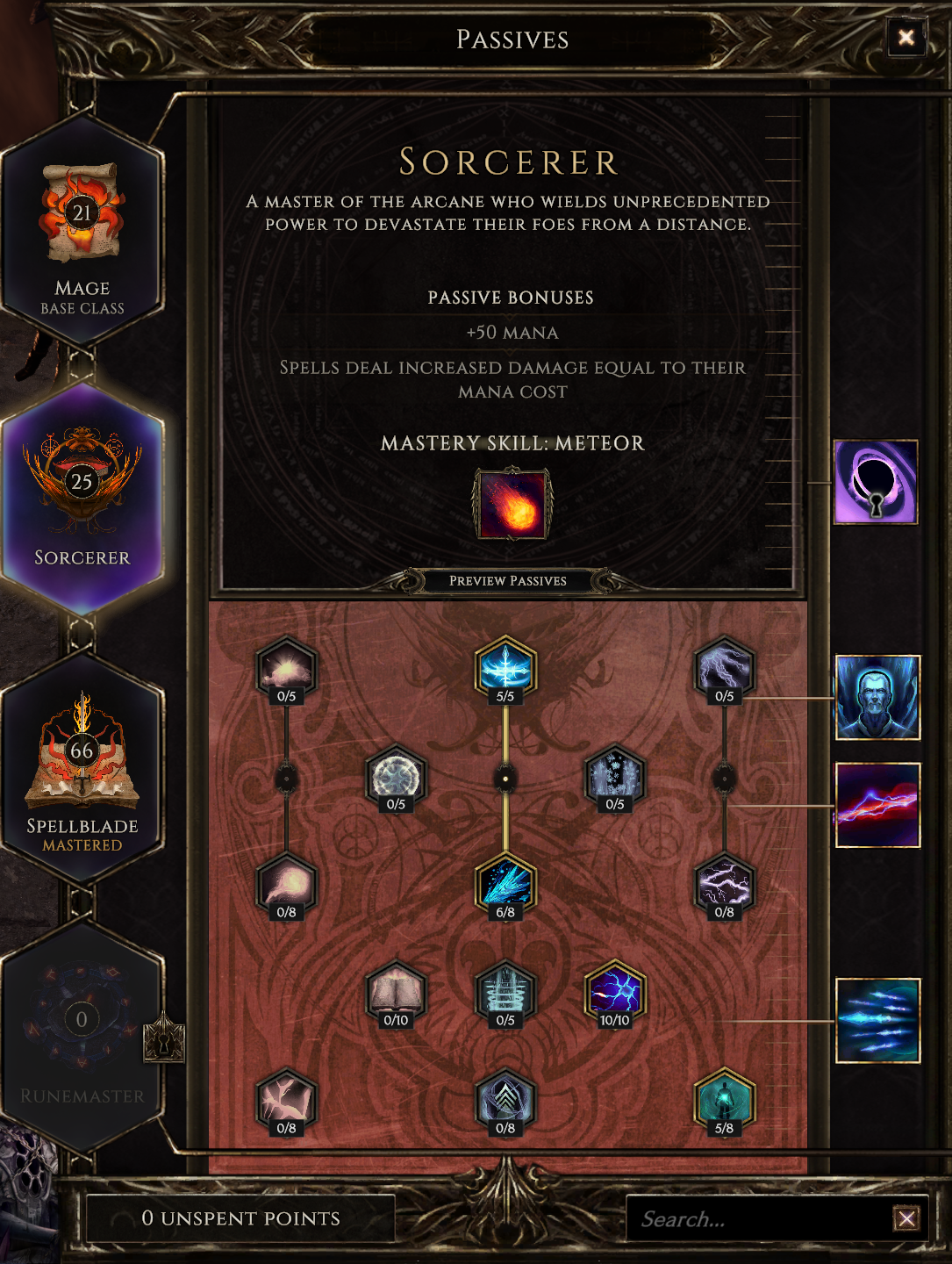 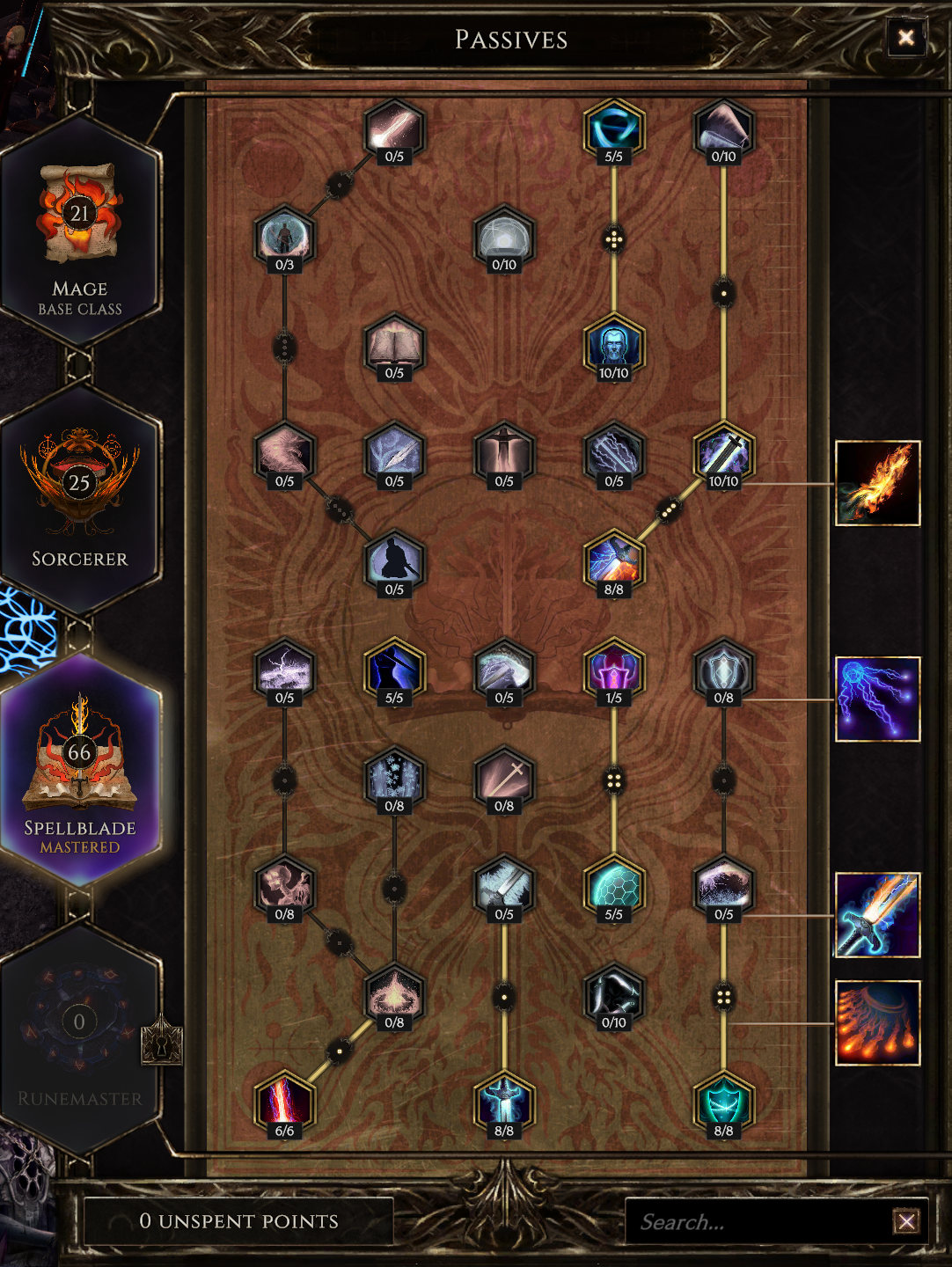 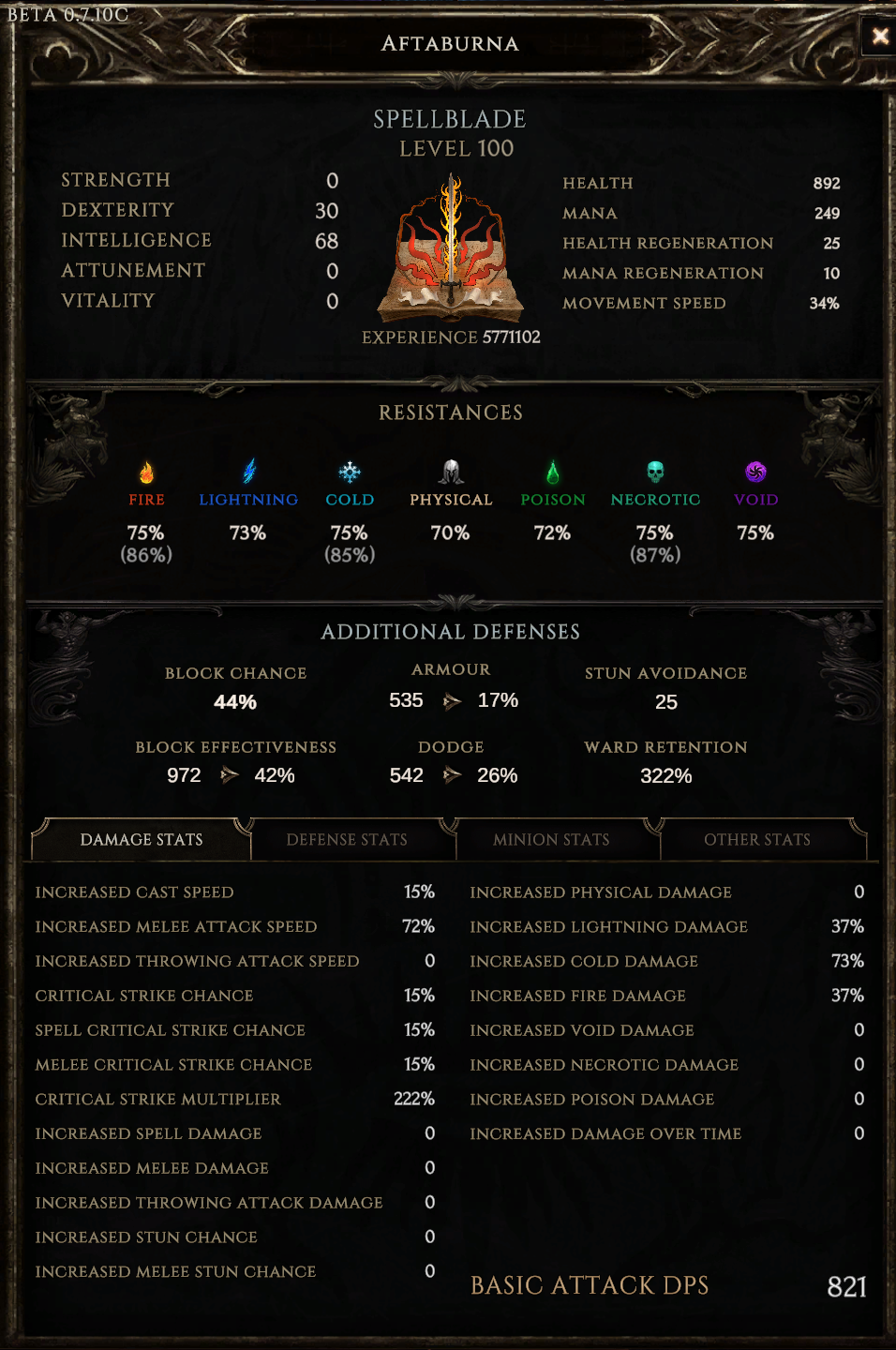 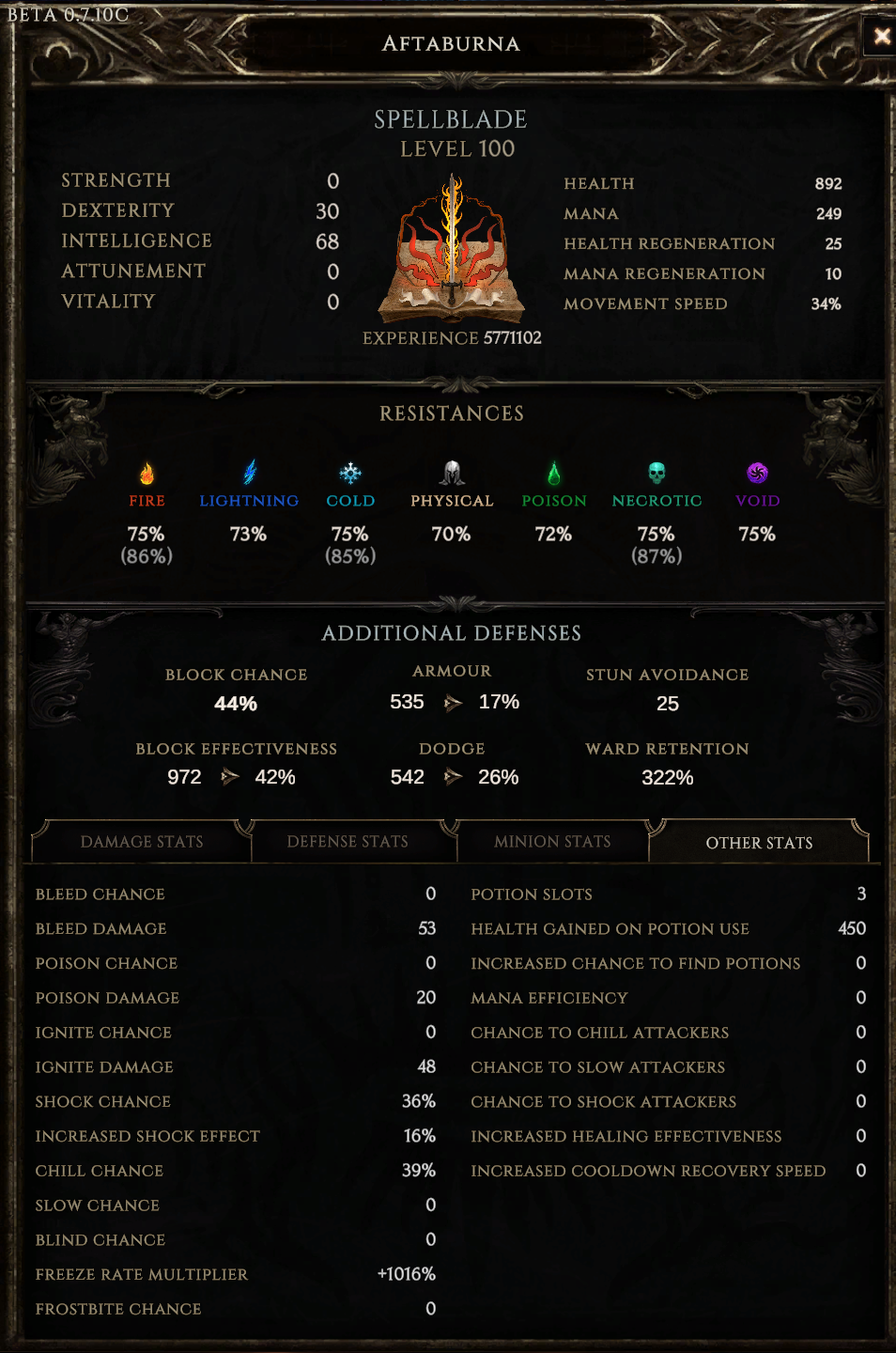 For Monoliths, I’m using 4 x Ornate Glass Idol for the extra damage and ward per second. Shard of the Shattered Lance is my weapon of choice. 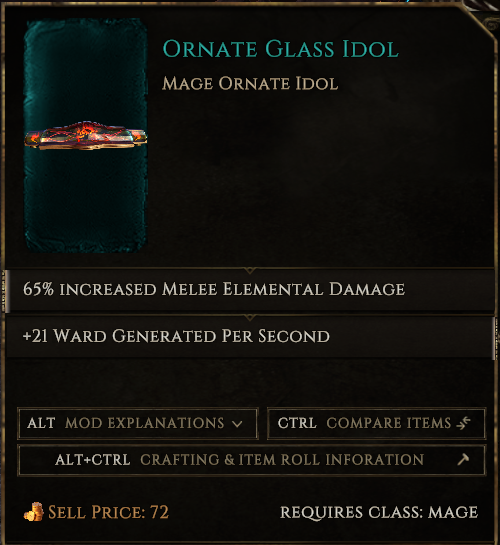 For Arena, I’m using 4 x Huge Arcane Idol for the chance for ward on hit. Best ones have crit strike chance as the top stat, but I’ve only found ONE of these, so freeze is good and I even use a stun avoidance one in arena for a bit of extra defense. 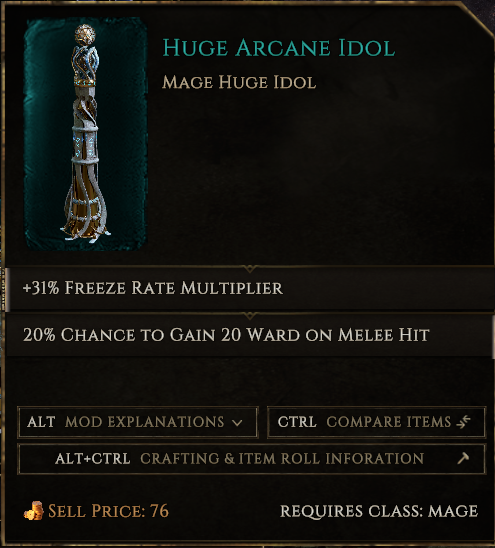 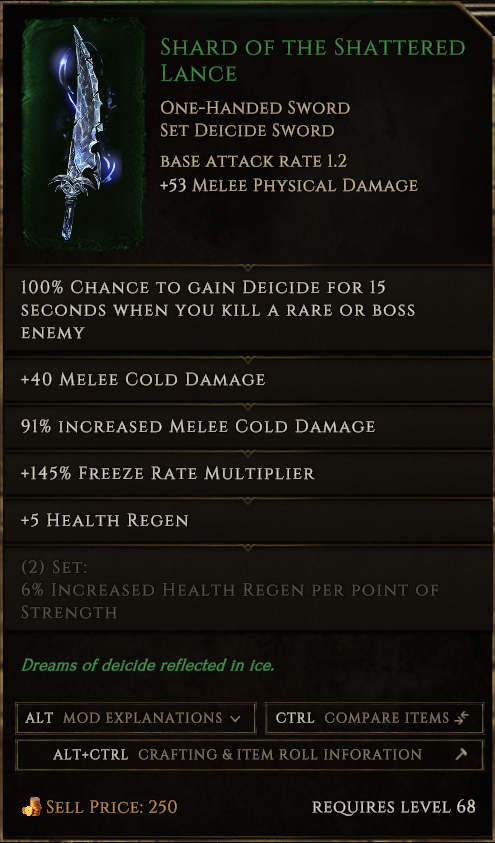 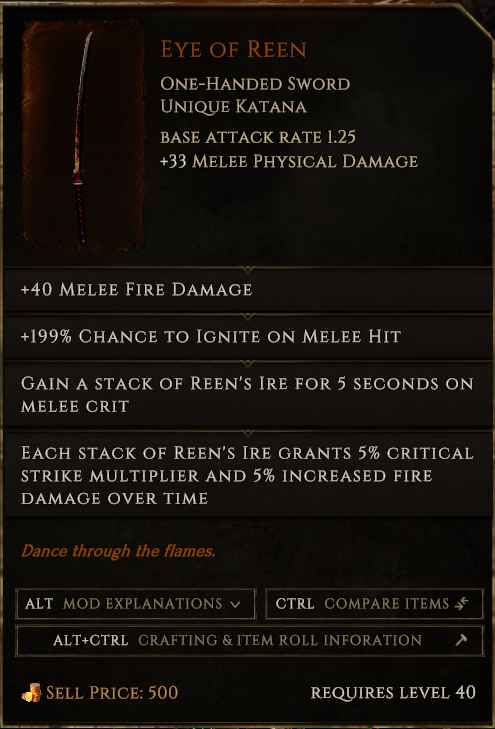 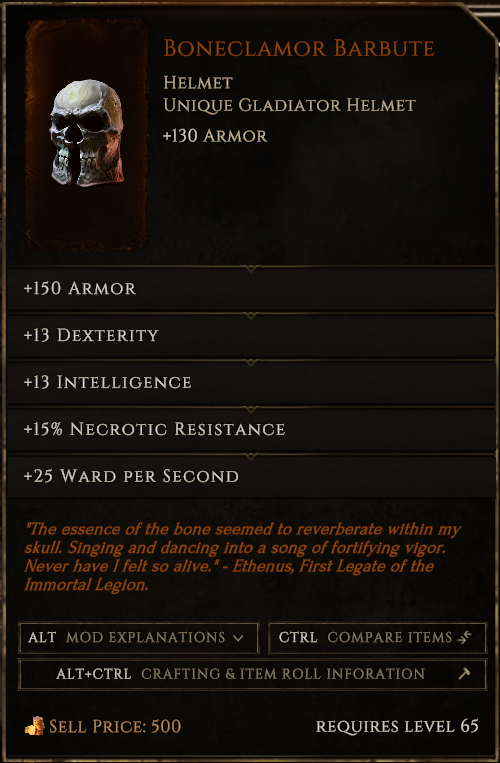 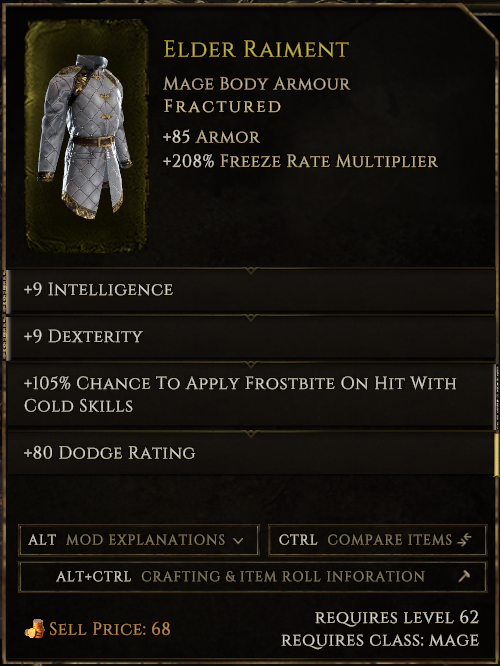 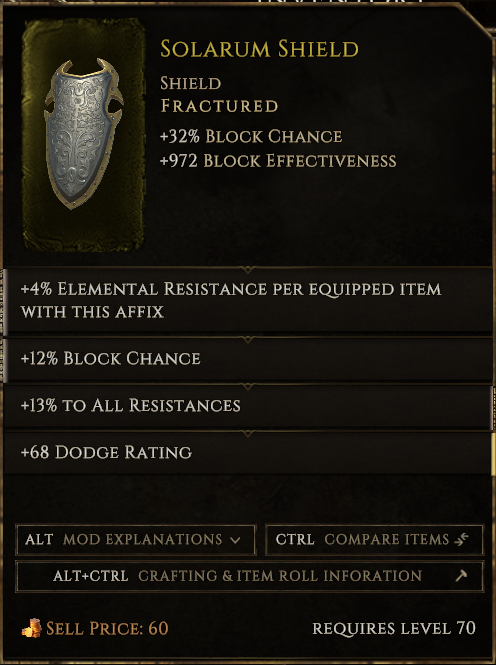 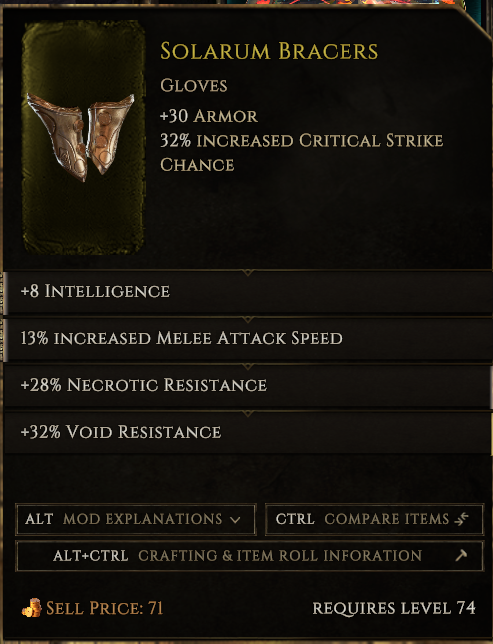 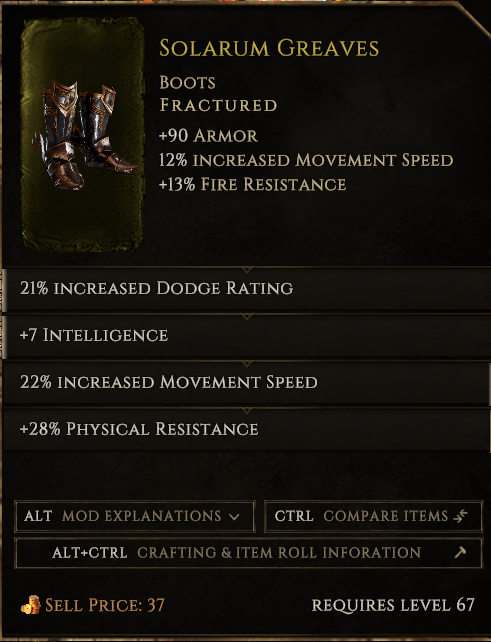 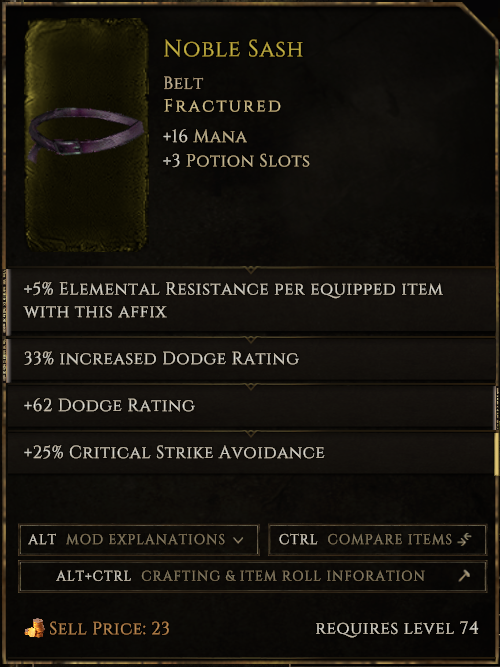 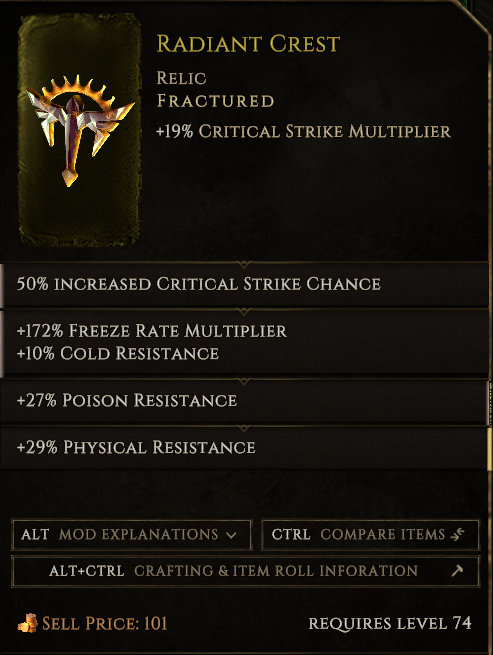 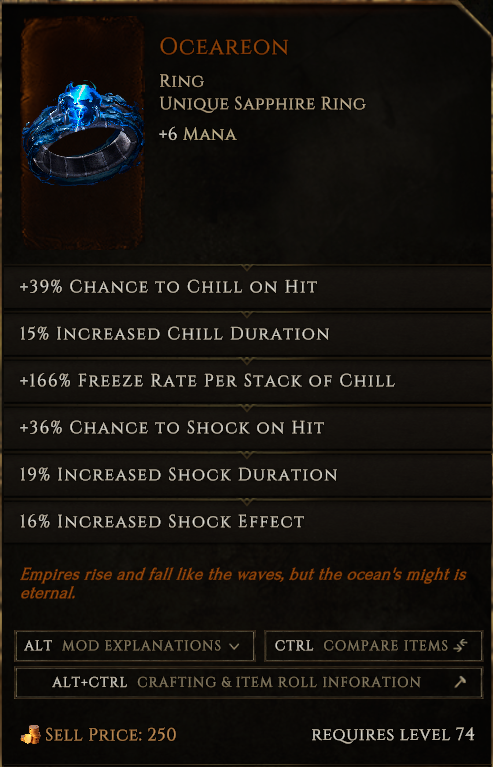 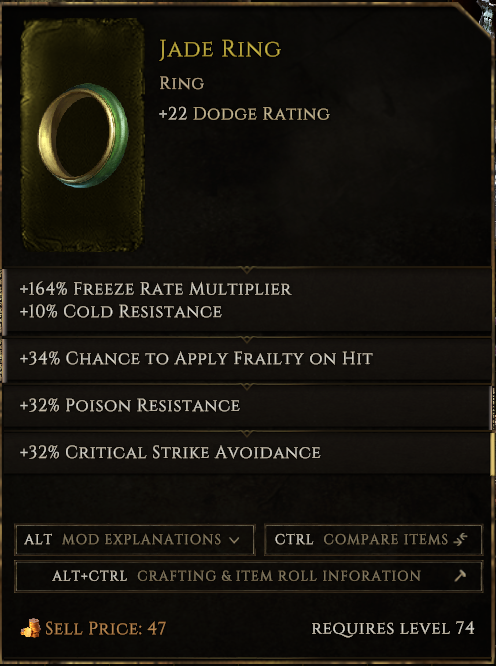 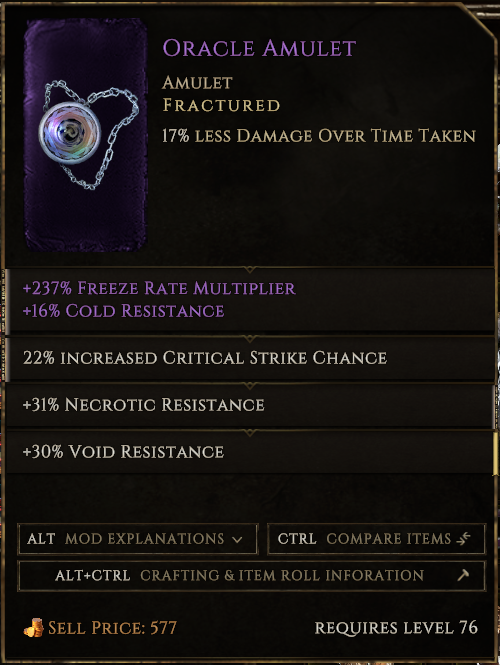 My items are far from optimal - I’m using what I find/craft and have a “what the hell, let’s give it a go” attitude to passives, skill nodes and items. I often respec skills at wave 150 as it’s only in the later waves you can tell whether something is useful or not.

For instance, I’m not using a jade amulet for the attack speed bonus as I got a nice high freeze roll on an oracle amulet. There is lot’s of room for variation in building items.

1 affix of Frailty on Hit is nice on ring, no more need due to overall attack speed of the build

You can see from each item that every one of them could be better rolls, better bases etc … but it also goes to show you what you can get away with and having fun instead of focusing on BiS gear.

I’ve also gone for a jack-of-all-trades, smorgasbord approach to defense. Get resists up, add some block, some dodge etc. Alongside the chill and freeze, this build has really good survivability.

Do some sheep-dogging if you need and Teleport right into the middle of a pack!

This will trigger Chill and Freeze from Elemental Nova and Frostbite from armour and then give your next attacks more damage. The Shatter Strike will do it’s thing, stacking Chill, Shock (bonus on Oceareon). Frostbite and ignite if using Eye of Reen.

For Arena and Eye of Reen, aim for around 18+ Critical Hit Chance by juggling items, passives and Idols.

The Chill chance from Oceareon and Enchant Weapon is enough to stack 3 quickly adding a large amount of freeze to chilled enemies.

Freeze chance is based on enemy current health and skill freeze chance/freeze multiplier and the new “Freeze Avoidance” from Frostbite introduced in 0.7.10 so they work together really well.

Timeline bosses are no issue, everything can be pretty much face-tanked, though main monolith bosses can be a bit slower to kill as it’s not a super high damage build … but every enemy can be frozen at any stage of the fight and clear speeds are fast.

Weave in Mana Strike as you need. Use the time when mobs are frozen to get mana back.

That’s it really, the rest is down to playstyle.

I hope this build will be a springboard for other players to give it a go and make it better!

Great guide, thanks for sharing it! I might just give this a go, it’s not a playstyle I’ve tried at all yet.