Looking forward for this class

can’t wait to try this out

You and me both! Necro is always my favourite class.

Do you play Grim Dawn? If so, did you like theirs? Anything you wish they’d done differently?

I love diablo2 necromancer, hopefully will be even more.

I second with the D2 Necro, I must say I was never able to get that feeling of a swarm of undead following you in any other games… Even D3 didn’t completely nail it imo…

I also like the D2 style of the Necro, looking forward to see what it will be like

I personally loved the caster/aura/life leeching necro from GW2. Don’t get me wrong, I love d2 necro, but maybe the type of necro I’m thinking of falls more in line with a warlock? Any thoughts?

I really liked the witch/necro in POE and my favorite aspect of it was the spectres. There are some things I would change but I’ve had hours of fun with my witch summoner in POE.

For my own personal preference, I am a full summoner only player. I like having all the focus on the minions. The only self cast spells would be buffs and debuffs. I have played more hours than I can count as a necro in EQ. I guess I just prefer that type of play style. I’m a solo player only, so I’ve always preferred pet classes.

I like having a lot of customization over my minions. As I level up I have a lot of control over the skills/strengths/weaknesses of my minions. So If I want real tanky minions who will survive an atomic bomb and always keep aggro but have low dps and no ranged attacks then I can go that direction. It will take me longer to clear a map/level but if I’m playing Hardcore that’s the sacrifice I make to stay alive.

Or I can go yolo and max out ranged dps and be able to have much faster clear speeds with less survivability. It would be really fun to have control over the amount of minions you could have. In other words, you choose to build up just a few really strong minions or you could choose to have a ton more weaker minions depending on your play style.

There is a couple of things I would like to suggest.

As a full summoner, your character/necro usually winds up being really squishy. This is to be expected. But I get frustrated when minion aggro always seems to be lacking. The point is, if a player is willing to play less aggressively and keeps things at a slower steady pace, then the minions should be able to draw, keep and hold aggro. You shouldn’t have to kite as a pet class. You should be able to send your minions out and they should be able to aggro and keep you safe. So as along as you stay at a safe distance, you should be able to stay alive.

So it would be up to the player to decide for themselves how aggressive they want to play. If they move faster they put themselves at more risk.

I get frustrated though when you do 97% of the content just fine but then you get to a boss that has crazy area and ranged damage and suddenly you’re dead because there is no way for you to avoid it and your too squishy to withstand it.

But I get it, it’s hard to make pet control fluid, easy and intuitive.

Really excited for this class. I am a big fan of necro/witch from D3 and POE as well. I have spent at least 100 hours with D3’s necromancer, and I can’t wait to see what you guys can come up with to make the necro a viable class.

I especially love pet builds with poison and elemental damage type of necromancers.

You and me both! Necro is always my favourite class.

Do you play Grim Dawn? If so, did you like theirs? Anything you wish they’d done differently?

I played it in Grim Dawn. Actually my main character. Grim dawn did fairly well, at least by the time I started playing which was before the expansion. Farming endgame though can be rough because certain parts they either die right away, or seem invulnerable. I also have basic gear with some minion health and damage stats and a reputation vendor bought potion to buff them to burst down bosses. The main issue I notice with every game I’ve played was that summoners generally feel either too weak in general, or over powered early game then almost seemingly useless endgame. It’s nice to be able to go through content without need gear and whatnot, but people get comfortable going through the content then by the time mid/end game comes you struggle to survive due to bad gear, summons just dying frequently or aggro is a mess and never know if you or what summons will be attacked (even if a taunt feature was implemented). When I look at this game and the 4-5 key binds, you can summon minions then switch out the binds for other skills. I find myself needing to keep my summons on my skill bar. Granted I have like no gear but this feeds into my example. Also knowing it’s the demo, it’s just a general idea that a lot of games seem to struggle balancing and making these mechanics work fluidly. Path of Exile has come a long way and after years of summoners feeling useless cause you could only use like SRS but even though was only a mapper, are now meta and able to almost effortlessly clear all the content. It will be tricky but I’m looking forward to testing the mechanics and providing what I can which from what I hear, could be very soon.

Sorry if this was unorganized, I was never a writer but hopefully bring some pointers to look out for.

Any kind of summoner is something i always will look forward to, some kind of skeleton army could be cool if they are somehow sustainable. Worst case necro hopeful have cold damage as primary element, wich is my fav element, sso nonetheless, can’t wait to try Necro !

I have always loved the Necro class. It is interesting to see how each developer makes it. I just love having an army of Skeletons dominating the field.

Loving the necro demo so far.

Hi guys. Played the Nec a bit. The basics are all there. Again, I don’t say this as necessarily a bad thing, just that it treads familiar ground. I will try to play to a higher level today, but so far I’ve enjoyed the Nec a bit more than the others (I know they also aren’t finished yet).

The game is still early, but I’m wondering what plans you all have for character customization? Is it going to be like D2 and PoE where the characters are set, or for example will we be able to eventually choose between male or female? Is gear going to eventually have more art models, or will it largely be one look and the different gear just changes stats, not appearance?

I don’t overly mind one way or the other, just curious what the overall scope plans to be.

We are in the process of removing the boards for the mastery classes.

I’ve moved this thread from Necromancer to Acolyte as a courtesy.

No matter what happens, I am definitely going to ‘Main’ a Necromancer.

They were always my Favorites, especially in Diablo 2.

This is an Excellent Video to get a good idea of how it will feel: 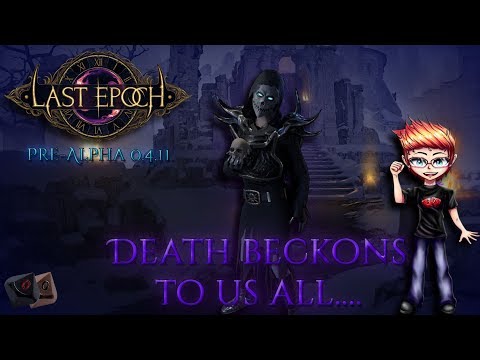 I’m sure @00_Critical will be happy to see that you’re a fan of his video!

I told him on Discord how grateful I was for his Videos.