Boss fight with the shade of the orobyss, the old setup 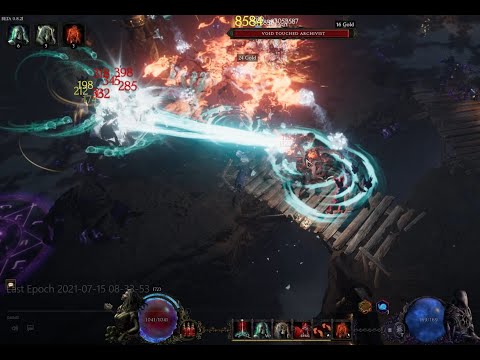 (you won’t get as much ward as presented in the first video, if you don’t have the equal casting speed, a fixed high-health target, as many as T6 minion health prefixes as I do, and plus I removed 1 point from necromantic fever to get more damage, which can be retroverted for more survivability.)

Volatile Zombies have been the most popular go-for skill for necromancer minions since its release. But most time it’s an add-on or support to other minions. And my build puts it under the spotlight. Look at the giants!

Fact, this build can facetank everything in the normal process of the game as long as you don’t loose your ward.

I am gonna put it as short as possible. It’s not quite comprehensive but the choices to make it right are crucial. The giant zombies suck too much mana to be able to continuously explode, which in fact killed people’s interest to go further. But with the proper setup of the combination of lifedrinker and skeletons, it can turn out to be invincible.

As long as mana problem solved out, everything else is just a natural thing.

What I have to point out particularly is my willingness goes to dread shade for its casting speed aura as the fifth skill choice, which will enable you to summon the most zombies in a given time.
However the setup with transplant is equally good for its mobility, minion damage boost, and more minions in the field.

Second thing is I prefer melee skeletons other than archers. Archers are more scattered than warriors in battles, harder to drain mana from.

What you need to keep an eye on is that you have to judge where your minions go next so that lifedrinker can be placed in the right location. If you misjudge, you could loose your ward and end up in critical situations.

But as long as you have your ward, nothing can kill you because “giant zombies” will transfer into tons of that in a very short time.

I am gonna wrap up here, what you see in the video is lvl 91’s performance. It get even better!

i need some help to insert the ytb video… how to do it right?

Just take the link for the video & paste it onto a blank line. Ideally with a blank line before & after it.

Edit: though it doesn’t like embedding a video within [ details] [ /details] tags. But you can use < details> < /details> tags instead (without the spaces).

Edit #2: Just use the following code:

thanks … I got it figured out; it has to be the shortlink, rather than the normal length link…

The only thing I’d say is that if you want to put an embedded video within a [ details] collapsable thing, you’d need to use the < details> code I put in the post above, otherwise it just displays a link rather than properly embedded.

Looks pretty awesome, definitely gonna give it a go, though I’d love a video of the clearspeed in monoliths. Thanks mate!

From where i am at. Uploading a video to youtube seems taking forever.

Switch dreadshade to transplant to gain mobility.
Then it is just as fast as other good builds in monolith.

It cannot affort to loose mana in heated battles . So skill rotation does the trick.

You have 1 point in Fire Arrow on your Skele Warrior tree, fyi.

I was running tests, but forgot to remove it before I post it…
thanks for the reminder…