was wondering why all are doing totem builds with entangling roots and not with vines. Most of you know the combi with the totem node “nightshade briar” and the unique “serpant`s milk”

Totem build usually stack minion cast speed which is also boosting poison apply by vines massively - I have put together this build in one evening with stuff I had from stash and other builds I tried already - not even optimized - check out the screenshot - super fun build - absolutely a boss killer! 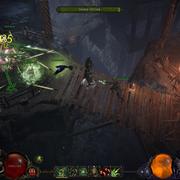 to achieve max damage you need to summon 18 temporary minions, while 2 perma minions will die repeatedly at 180+ corruption, you have 1.3k HP and probably no real defence so you will die easily

LE isnt like PoE where you can go into a boss room with a glass cannon and all damage and nuke the boss within moments so you avoid every single mechanic, the ramping damage reduction will stop that from happening

Well, you are 100% correct - but did I advertise anything like that?! Can you see “build guide” somewhere?!
I didnt say that this is the perfect build - unbelivable tanky and with the most damage output…
I just wanted to share the skill setup since I didnt see anyone using it yet or talking about.

Maybe some other players are like me just want to have some fun farming in the beginning of endgame where rewards are high and game not to punishing?!
This is one of my fastetest builds I have played yet - in Monos you basically only use totems - place 3 or 6 on a mob and it dies instantly - and if its a bit tankier you cast some vines on top - (in monos all is dead already when I start casting vines…for mapping I even use “Silvafrond” now…) And for bossing?! You dont need the perma minions to kill every mono boss super fast and totem and vines are up at any time.

Did make some adjustments in the meantime though - switched to totem set and bastion - damage went down from the seen 440k to around 350k but still - everything just melts in super speed and it is just fun - for me - and this is what the game is about, isnt it?!

And I bet some of our veterans would make a tanky build out of it with some investment and correct gearing.

This is how my build looks like now and for anyone who likes the totem playstyle (which I really do) should give this one a try - and the potential for end of endgame is clearly given!

Have fun, all of you!