Been working for months now on a Consecrated Ground Judgement build to maximize the Consecrated Ground damage over time (DOT) fire damage. Just FYI I have done tons of research and seen that others have not gotten it to work - saying it doesn’t do enough damage, yet here I am to make it work or die trying. I’ve done some testing in game which I can post the results of later, the testing included the (individual) addition of the following damage stats: %fire dmg, %healing effectiveness, Strength and Attunement attribute points, %melee dmg, %fire DOT, and %elemental DOT. The testing showed all the listed stats DO contribute to damage increases of Consecrated Ground, with Attunement, Strength, and Healing Effectiveness being the top 3. The tests were performed on the dummy, with no damage stat influences from character passives and I can post the Judgement skill tree points. Sanctification was used (no HITS from judgement use). One testing event used the Sigil of Sacrifice node(+12 base fire dmg per sigil consumed) & Sigils of Hope (no dmg influence from ACTIVE sigils, and 4 sigils consumed every time) and one testing event did not spec into the Sigil of Sacrifice node. This was done to see how much damage the Sigil of Sacrifice node actually adds to Consecrated Ground and how viable its usage is for a Consecrated Ground damage build. The test consisted of the following steps:

Here are the screenshots of the passives I used during the tests
(I guess I am inept when it comes to using paint, apologies for the cut offs)

I specc’d 5 points into Abyssal Endurance

Results of Sigil of Sacrifice Test:

Judgement Tree without Sigil of Sacrifice Test (sorry for cut-off)

Results of test with no Sigils:

Also worth noting, there was only a 111.76% base dmg increase w/Sigil of Sacrifice vs. without (comparing both baseline damage entries). Based on the Sigil of Sacrifice tool tip, this increase should be closer to a 1200% increase since we should be getting +12 base fire damage added per sigil sacrificed ; we sacrificed 4 sigils so it should be +48 which should be 1200% * 4 (base fire damage of consecrated ground) = 48. So I just thought that was an interesting takeaway. Because of this as well as diminishing numbers of sigils of hope over the duration of an actual fight, I concluded that using Consecrated Ground (CG) (with the Sigils of Sacrifice node) numerous times would result in inconsistent DPS for each CG as time goes on. As such, it would be better to spend those points into other areas of the Judgement tree to get more damage. In addition, if you’re sacrificing Sigils of Hope they will not be active to give damage and defensive buffs, further limiting damage output.

All of this is to ask the question: what is the best damage stat distribution to maximize the damage of Consecrated Ground? Passive nodes for Judgement indicate Consecrated Ground scales with Fire, Melee, and Damage Over Time. Like I stated earlier, Attunement, Strength, and Healing Effectiveness seem to be the top stats to focus, however I have learned through research that it is supposed to be better to spread damage stats out over multiple different sources rather than pile into 1 or 2. However, %fire dmg, %healing effectiveness, Strength and Attunement attribute points, %melee dmg, %fire DOT, and %elemental DOT are a lot of damage stats to include as affixes, so I would like some intelligent input on how the best way to go about it is?

Are you sure the consecrated ground damage was changing with % melee damage 'cause that’s not what the skill says if you hold alt over it.

Are you saying that the 4% increased damage from 1 attunement was worth more than 4% increased fire damage? I could understand healing effectiveness being more effective since the skill says it’s a multiplicative modifier. But I’d have expected the others to have the same effect on damage per % modifier.

I assume you put points into your passive tree to unlock Judgement that wouldn’t have an effect on the damage, such as: 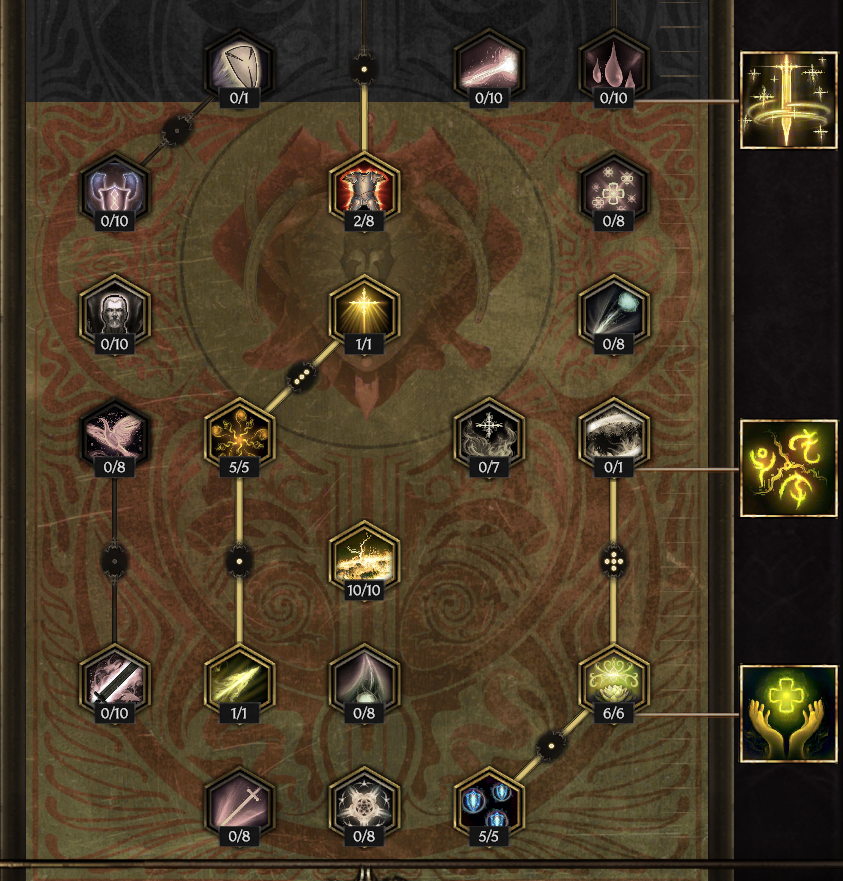 Yes Llama8 I am sure %melee did contribute damage, I believe it was towards the bottom in terms of increased damage but it did increase somewhat. And yes, that distribution looks like exactly what I used. I will post pictures of what I did once I get back home today. And yes Attunement was by far the best stat to focus which makes sense since the Judgement details indicate you get: +4% increase in damage AND +4% increased healing effectiveness per point of Attunement regarding Judgement. Also, Strength is listed in the Judgement details as giving +4% increased damager per point of Strength. Also (being a Paladin class) I believe Paladins get 1% increased healing effectiveness per point of attunement just for being Paladin.

Ahh yes, I’d forgotten about that. Each point of attunement is giving you 4% increased damage as well as 5% more damage (via healing effectiveness, assuming attunement give 4% healing per point, not on my pc atm).

Priority of Stats to scale Consecrated Ground are

Thanks for the input. I can read what the scaling tags are for Judgement, Consecrated Ground, skill descriptions, skill nodes, etc. And there are some mixed messages, for example, as you stated it does say at the end of the description of Judgement that Consecrated Ground doesn’t scale with melee damage. However, if you look at nodes within the Judgement skill tree which increase or damage or mention Consecrated Ground they specifically say “melee”. Again, im not trying to say “I need to scale melee damage for Consecrated Ground or that I should” I’m simply putting out results of testing I did which you can take or leave as helpful or not, I don’t care. And, if you read the results of the testing, you can clearly see that %melee damage does increase the damage output, doesn’t increase it a lot but it does. And yes thank you I have done research and have seen all the things you mentioned. This link - Damage guide for beginners (completed) - HolyCoffee is what I’m mainly going off to understand how damage scaling (in general) works in LE. If anyone has a better source (or more updated one) for explaining general damage scaling and more specifically how to prioritize affixes for a given build, please share! Thanks again

In specific two nodes if you taps Alt they say the scale Consecrated Ground damage: Searing Heart and Holly Fire. But the rest doenst bc the tree specific hit damage in things like crit wich DoT doenst crit anyway.
About the relation of Sigils of Hope, the node Decree of Flame increased the base damage of Consecrated Ground bc he doenst specific anyhing.
And you dont want to spend the Sigil when attacks bc each give you Healing Efectiveness wich is a more multiplier.
Mainly this build is basically you attacks to proc Consecrated Ground and move, Judgement’s attacks inself doesn’t gonna do dmg bc most of the passive and tree are for stacking Healing Effectiveness and Life/Resist

Another setup can be using the node Anointed, turning Consecrated Ground in a area playing like RF from PoE

However, if you look at nodes within the Judgement skill tree which increase or damage or mention Consecrated Ground they specifically say “melee”.

None of the Consecrated Ground nodes (on the left side of the tree) have any melee bonuses though.

The alt-text on Judgement (right at the bottom) states that Consecrated Ground does not scale with melee damage. However I equipped a sword with only % melee damage & my Consecrated Ground damage went up from 17 to 21 (24% increase, given there’s also the +100% damage buff from being a Paladin at full HP) with no other changes in equipment.

None of the Consecrated Ground nodes (on the left side of the tree) have any melee bonuses though.

Lingering Force (duration node), Flaming Soul (CG damage node), Ashes to Dust (armor shred node), Destructive Impact (area node), Expedite and Sanctified Serenity (CG healing node) - all those are on the left side of the tree and in their description list “Fire, Melee, and Damage Over Time” as tags. If I knew how to image capture from the build planner to show the pictures here I would. So if somehow that is supposed to mean that “Melee” doesn’t influence effectiveness or damage of those nodes and consequently - Consecrated Ground itself then I need more explanation as to why that is. In addition, the Searing Faith node on the right side of the tree has the same tags as well. At the end of the day, I don’t really care since I’m not really looking to invest into %melee damage anyway, just trying to clarify what the “tags” actually mean then if you’re saying they don’t give “melee bonuses” despite having the “Melee” tag. And thank you Llama for confirming my tests, good to know I’m not crazy.

What I am trying to learn from this post is: what is the best damage stat distribution to maximize the damage of Consecrated Ground? Is it better to focus on a few damage stats (in the effort to MAXIMIZE damage) for CG (Attunement, Strength, Healing Eff., DOT)? OR as indicated in this damage scaling guide Damage guide for beginners (completed) - HolyCoffee, is it better to spread out damage stats throughout your build and have at least 1 affix of each stat? - specifically for CG I am looking at the %fire dmg, %healing effectiveness, Strength and Attunement attribute points, %melee dmg, %fire DOT, and %elemental DOT stats. Thanks guys

Apart from Attunement & healing effectiveness (due to it’s % more modifier for Consecrated Ground), it doesn’t really matter. Any of % Fire, % DoT, % Elemental, % Elemental DoT & even Strength will be good, you just want as big numbers as you can get from them.

I’d probably prioritise Attunement & healing effectiveness on the slots you can get it, then any of the other affixes in the other slots.

Gotcha. In regards to the “melee” skill tag for Judgement as well as Consecrated Ground, does that just mean Judgement/CG is considered a “melee skill” and not that it necessarily scales with melee damage modifiers? I see that the melee dmg% bug we discussed earlier is fixed now in 0.8.2

Reason I ask is cuz I’m trying to figure out if the Adorned Idol affix: +(7-14)% melee fire penetration would apply when using Judgement- Consecrated Ground?

@Llama8 you are a gentleman and a scholar and I really do appreciate your advice.

Agreed, though the melee bit is a bug.

Judgment is a melee hit that created Cons Ground on hit. The melee tag exist bc the principal skill is Judgement.

The melee tag on Consecrated Ground was an error which is why it was removed in 0.8.2.