You can slap a HeadHunter onto basically any build and turn it into a rocketship, and the idea that builds with expensive items are necessary to “run it normally” is nonsense. Don’t ask me if I’ve played POE if you don’t understand those things. I’ve played POE since Piety was the last boss. Don’t tell me what I’m about, son.

I don’t want the HEADHUNTER belt in the last epoch

Yes you do. It’s what you said when you posted. You said it specifically.

Thread text: “It would be nice to have an item like this to have motivation to grind the late game of the game”

One of the biggest mistakes we make when arguing with people is that we don’t take their own words at face value-- we allow them pretend that their initial move was meaningless in comparison to the revisions, like a bank robber who says to the police, “yeah, but I’m giving it back right now.” The initial volley is always the most relevant: everything afterwards is defense.

We both know exactly what you want. You already said it.

Then don’t play it. It’s ok to choose not to play games that aren’t a good fit for you. You don’t need to try to make them into other games that already giving you what you want.

Or, you could consider the possibility that your desire to play on turbo isn’t because blazing through maps is actually any fun for you, but because you’ve been conditioned to see it as the only meaningful win condition. You’ve spent 9 years playing POE, a game that through its design and its community has put unending pressure on you to maximize clear speed because “more rolls of the dice = more chances at loot” and your baseline chances of good loot are atrocious. And the constant FOMO has made it impossible to see it any other way than “fast good, not-fast bad” and diminished your ability to enjoy the game if you aren’t going as fast as you can.

None of that is your fault. You are a victim of it. But it’s not a reason to ask EHG to pollute their game with the consequences of GGG’s cascade of poorly thought out design decisions.

friend I have 700 hours of Last epoch according to steam, and 5 char lvl 100 and another 5 lv 90+ I think I could test a lot and know what I’m talking about, I can play PoE diablo and LE at the same time if I want , what you didn’t understand is that I don’t want the “Headhunter” belt in the game, but something similar doesn’t need to be stolen as much as it has in other games grim dawn, slowmancer, wolcen, hero siege etc… they all have something similar and they are just as good, that would be 1 more for the game. well anyway I hope the company can think of something about

People have to understand that casual players are the majority not only in the last epoch but in other games, not everyone has free time and hours of game time to play something slow, making the farm faster to clean only maps is a way to attract more casual players. people here live in a bubble that Last epoch cannot change to attract new players and have more diversity

You keep using diversity but I dont think you know what you are saying.

What you are saying is homogenization

if all the games become similar you dont have diversity. Diversity is celebrating the differences the games have while enjoying them all.

if every restaurant has the same menu, you dont have “Diversity” because you get to choose which location you go to, you simply have homogenized the food scene.

LE has lots of things to work on to attract new players, speed of combat isnt the only tool to do that, and might not even have that effect.

For example chronicon has way faster paced gameplay and auto loot etc. it has less daily players then last epoch.

There is many facets to the arpg genre, and atleast in the steam sphere, PoE is the exception not the rule in terms of players, regardless of speed of combat or graphics etc.

friend I have 700 hours of Last epoch according to steam

If you’d like to clarify that you are ESL and thereby have a different understanding of the words you used to tell us what you want, I’d be more willing to believe that what you said you want and what you actually want are two different things. But as it stands now, you told everyone very plainly what you want - an item similar to HeadHunter. By reasonable understanding, that does not carry the meaning “oh I just meant like a really really strong item that lets me be The Flash in monos, not an item that steals rare mob mods when you kill them”.

if every restaurant has the same menu, you dont have “Diversity” because you get to choose which location you go to, you simply have homogenized the food scene.

If that was relevant it wouldn’t have been the #1 chase item from the time it was introduced to the time that Mageblood was.

Anyway I dont care I actually do not want HH in this game, I used HH a few times and its not for me

The closest thing you can get currently to what you want is this. 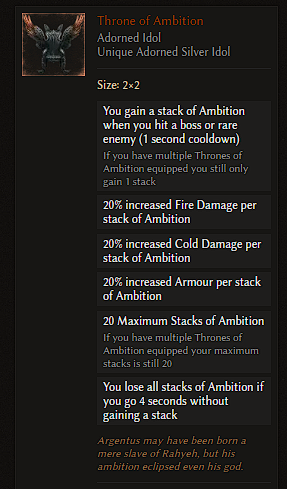 this is really nice

When you say that, what do you mean? Do you mean something that gains power for a duration after you kill a mob, something that “steals” modifiers from magic/rare/mobs or “just” something that’s rare AF & significantly contributes to the zoom zoom play style?

And compared to HH, those examples do not provide as large a jump in clear speed, to as broad a spectrum of builds, with as little thought behind them. You can’t just swap out whatever other item you’ve got in that slot - no matter what it is and no matter your build - with any of those items and have it automatically work. And even if they are good for your character, there is not a comparable increase in raw clear speed that comes with them.

That is why HH is bad design. The power increase is massive and nothing about your character matters in the decision to equip it.

You can even lump “the gull” into that group it is a simplistic gain a shrine buff then run around without missing a beat. Take the extended shrine duration nodes and you have an immortal run in a map, basically “HH lite”. The point is where it stops once it starts. It is better leave that horse in the barn, as you will never catch it again when it escapes.

Not even the Gull, take all the Shrine nodes on the Atlas and you can speedclear maps with 4-5 shrine effects on you at once. You are running around with 20% MORE life/Aoe, 86% or so resistance, Haste Shrine, also Echoing Shrine/Diamond Shrine/Invuln with nothing at all

Well, the point of the OP was an item that made them zoom zoom through maps, not necessarily the effects themselves.

You also have to remember that a very large percentage of us who have been playing here for a while are also PoE vets, some still play, some (like me) became disillusioned.
Some of us have actually deleted that number of character slots 90+ in order to make way for new league characters, I know I’ve had to zap a load of old toons. In my playing stint, I pretty much played every day in every league. What I’m saying is that your knowledge of PoE is not exclusive to you, there are lots of others here with an equal, if not more extensive experience to call upon.

Some here are fans of Diablo, PoE etc. You also have to remember that a large number of people here came here because LE offered something different to those games, in short the last thing some wanted was yet another clone of something they left behind…

Maybe it’s just me, but I’ve noticed a bit of a change recently in the forums (last cpl of months). When I first came here, everyone was praising the game and the devs mainly because they did things differently to other games in the genre. The posts, even though we didn’t all agree, were generally well written, well thought out, & well constructed with good grammar, spelling etc. Hardly anyone wanted a cloning of things from other games.

Recently (and I apologise if this sounds snobbish, it is not meant in that way) I have seen a slew of posts from “inactive in the forums” accounts all requesting cloning of items & features from other games in our genre, particularly PoE. Most of these posts all share one thing in common; they’re inarticulate, badly spelled, poor grammar, and normally devolve into rants or become “shouty”. Older more active forum members try to reply and usually do so in an articulate manner, and then get shouted down by these “less active” accounts. This seems to be a pattern, and it’s one I have been examining with interest.

Could it be that these accounts are shills? This wouldn’t be the first time that this has happened. I don’t know. It does seem a bit of a stretch. However, if anyone wants to also take the time to look at the grammatical structure of these types of posts, then the point I made is clearly evident.

Regardless of that though. People come to LE from other games in the genre because it is a DIFFERENT GAME. Trying then to make it into a clone seems self destructive and daft. If you miss the other game and things from it so much, the answer is simple - keep playing that game!

If you own a Bicycle and a Motorbike, then decide to buy a car why on earth would you want to try to turn the car into a Bike or a Motorbike when you already owned them?

I’m glad to see the last epoch community so understanding lol
I thought the forum was for giving suggestions and having different opinions, And sorry for some weird words because I use google translate

We understand. There are usually three groups in these types of discussions: 1) the ones that want the change 2) ones that do not want the change 3) those who do not care either way because they may never see the benefit and give up even thinking about the chase.
My main issue is once you go down the power creep road it is hard to stop it. The POE Nerf patch 3.15 to 3.16 upset a lot of casual players. EHG has a more balanced approach to design. As it is designed with a more casual flair than competition that POE has. Zizaran runs his gauntlet event that is liked by a segment of the community but not all participate.

I thought the forum was for giving suggestions

It is also for other people to respond to those suggestions, which includes being able to say “I don’t like your suggestion”.