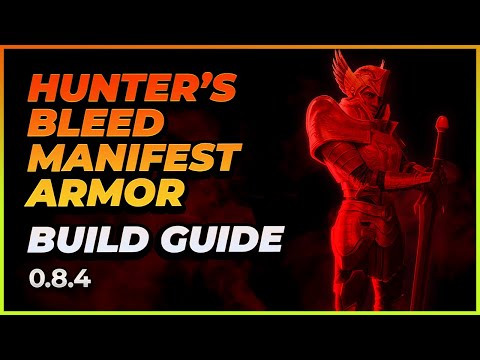 I have been messing around with a Paladin with Bleed but never thought of trying it with the Manifest Armour… I kept ending up with a virtually unkillable Pally but damage just wasnt there and thats no fun to play… Instead of replicating your build, I might steal the idea and see if a non MA version can work too…

I have Kryces Manifest Armour Forge Guard which is VERY similar but goes the Crit route and uses Apathy’s Maw / Prism etc… Min.Maxed it does over a million damage but nothing near your 5mill with Abyssal Echoes… Almost wonder if they might nerf Manifest Armour a little after seeing these two builds…

This part im not sure about. the bleed effect and bleed duration prefixes on both chest and helm are very rare. So it will take time.

I really like the idea and for sure I will play around!

Some idea right of the bat for budget, time to get the right affix: unique doublet of onus tul can really help on chest at least.
Also to test but for the glove maybe salt the wound???

I checked into that idea and not sure it’s worth it. Ways to get crit multiplier on your minion are:

In all cases there is a big opportunity cost.

Suloron’s step would not apply since it is a melee specific crit multi.

Also, we don’t actl know if the statline that converts the crit multi to bleed eff is affected by the gloves eff node MA. Even if it doesn’t, keep in mind that salt the wound has a decent chunk of crit multi and % increased DoT on it.

So, I tested a bardiche with wing guards vs salt the wound with two katanas with attack speed and multiplier on the training dummy. In both cases I had 300% gloves effect and a turquoise ring with throwing attack speed (I think both versions benefit from it).

The first one seemed much stronger. I assume that the bleed effect from salt the wound does not really work, because it would be really strong if the 300% bonus kicks in.

hi there, thanks for testing it!

Yes I down to the same conclusion of both of you, it’s not worth it. only things that suprising me is with this heavy bleed damage build (coming form minion) I dont see a big diffrence between 2H and 1h and shield, at least less than the crit version. But maybe it’s because my paly is lower level than my FG, I need to test it at higher level with better gear to see the diffrence potentially.

I tested it again and I get almost the same numbers with the katanas with or without salt the wound.

It’s really hard to say though. In c100 everything dies immediately, the dummy pops out so many numbers so fast it’s hard to see anything and the skill dps disso not calculate anything for ma.

yes exactly we need a proper testing dumy setup, with a dps for a given time, ie 30 sec, and cherry on the pie will be a breakdown od total damage per skill used