How does flurry apply ailments?

There are nodes in Flurry’s tree that apply ailments. One gives 100% chance to slow. Another gives bleed, poison, and shred to the different hits. How does this work with Flurry’s 40% ailment reduction? Would that slow node only give 60% slow (if it was your only source of slow)? For that other node, if it worked this way, it would only be effective with all 4 points if this was your only source for these things, because each point gives 10%. If this is how it works, I’m sure a lot of players won’t pick up on this and would take this node pointlessly.

But for all values in the flurry tree, these don’t fall under that 40% restriction. These values state the actual real chances if applying ailments with a flurry hit. Else all these numbers would be misleading because you would have to factor the 40% lless chance into the calculation by yourself.

Just note that the increased chances for ailments from the tree don’t apply to all the flurry hits per cast. The first hit for example only increases poison chance. Only the second hit has increased chance for bleed.

Thank you, Raw Suicide! However, I wished you didn’t use the number 100 in your example, because that results in me still not knowing the answer to the first question (any other number would of worked). So is the 40% subtracted or multiplied? In my example with 50, is it 10 or 30?

None of any %increases or decreases(or more/less) are substracted or added, they are always multiplied.

This not only applies to this ailment example, but also general damage calculation.

I highly suggest you reading the game guide section about “Increases”, “More” and “Added”.
Because when you want to apply “increases” and “more” modifiers to the same thing, there is some priority, how they get calculated.

So is the 40% subtracted or multiplied?

Oh… I thought it was clear from:

[(Bleed chance from all sources outside the flurry tree) x 0.6]…

None of any %increases or decreases(or more/less) are substracted or added, they are always multiplied.

Apart from when the % increases are all added together then applied, which I think was the OP’s confusion, since the text for flurry says it has a reduced (as in increased/reduced) chance to apply ailments which following the logic used for all other increased/reduced modifiers would mean that it’s added to the chance to apply ailments when really it should be applied as a more/less modifier. 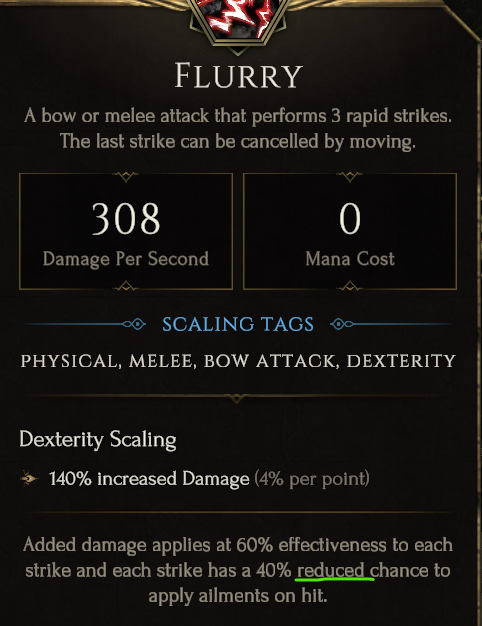 @Hackaloken could we get this text changed?

I don’t find this confusing at all.

It would make no sese to have a flat reduction in ailment frequency.

That would be super bad for early game and meaningless in endgame.

It would make no sese to have a flat reduction in ailment frequency.

But the ailment frequency is something that affects all ailments across the board and it’s very clear to me, that it applies to all ailments inflicted by that particular skill.

It’s an entire different mechanic comapred to any stat that gives you “x% increase chance to bleed”.

So in the contexts it’s used I don’t think it’s wrong.

It is completely wrong. Why would you use a word to mean one mathematical operation in one context & the opposite in a slightly different but related operation?

If it were % reduced damage, you wouldn’t expect it to do 40% less damage would you?

It’s wrong. I’m glad you know how it works & I do as well, but that doesn’t change the fact that it’s incorrect & can confuse people.

It doesn’t even say “multiplicative with other modifiers”, so going purely from the language used, it shouldn’t do what you say it does, it should be a flat modifier to the ailment chance.

The game needs to be consistent in it’s use of terminology (increased/reduced, more/less, allies, etc) across the board so that players can easily understand what the game is telling them, rather than having to think whether this one use of a term is the exception to the rule.

Apart from when the % increases are all added together then applied, which I think was the OP’s confusion, since the text for flurry says it has a reduced (as in increased/reduced) chance to apply ailments which following the logic used for all other increased/reduced modifiers would mean that it’s added to the chance to apply ailments when really it should be applied as a more/less modifier.

This exactly. I think it needs be changed, too. If it acts like a more/less modifier, and not a increased/reduced, then it needs to reflect that in its wording (as Llama8 so nicely put it in the previous post).

Yep the tooltip need changing I suggest change it to:
Added damage and aliment chance are applied at 60% effectiveness to each hit.
Problem solved.

I didn’t even realize that the penalty was that big. I figured if we had 400% poison chance then it’d be just 360% chance. But reality with that number would be 240% then I guess.

Added damage and aliment chance from outside this tree are applied at 60% effectiveness to each hit.

Slight change to highlight the difference between bonuses from the tree itself.

I have another comment about channeled flurry…The “Veil of night” passive seems to not work correctly with channeled flurry. It clearly says “When you use a melee skill and hit at least one enemy you have a chance to gain a stack of Dusk Shroud”…yet it seems to only calculate this chance on the very first tick of flurry, regardless of how many enemies I hit or how long I channel. Is this intended?

This is what is still written in the description of the skill.
Isn’t that right?

That is what it says, but that’s not what it means (per my “conversation” with Heavy further up), both are multiplicative.