Hey, Travelers! I'm Judd Cobler, Game Director of Last Epoch and I'll be doing an AMA on May 20th! 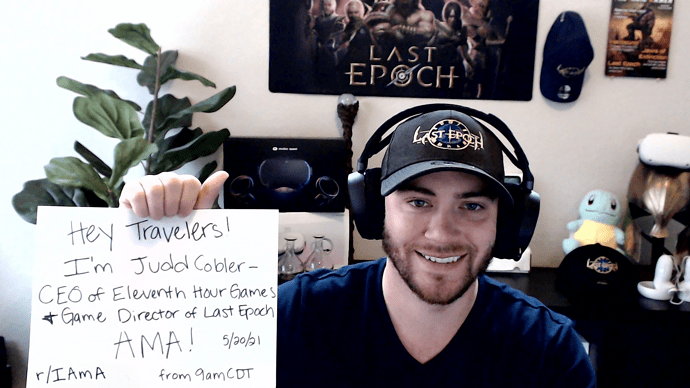 I’ll be at r/IAmA May 20th, 2021 at 9am CDT to answer your questions regarding Last Epoch, EHG, and how I created and grew a game studio over 4 years that led to our first early access title becoming a Steam top seller.

Last Epoch started as an after-hours project that myself and a few other Action-RPG fanatics would pour all our free time into. Within 12 months we were able to launch our Kickstarter campaign which raised just over $250,000. This allowed me to officially bring on a few team members full time and begin laying the foundation for what EHG would become. Since then I have been able to hire over 50 full-time amazing individuals from around the world. This includes people from the United States, Canada, Brazil, Australia, Russia and many other countries in between. As a result of the team’s passion and energy we made it onto Steam’s Top Seller list multiple times while still in Early Access and self-publishing. I’m excited to sit down with you all to answer questions and discuss Last Epoch and the game studio, Eleventh Hour Games, behind it.

For continued discussion make sure you join our other communities!

Not one Easter egg in the picture! Sad day.
Looking forward to the AMA

Chalice of the Void on 0.

i don’t know, that squirtle might be hinting at the new druid form.

I feel fortunate to be here for the journey. To come so far in that amount of time alone, is a reflection of the drive of your team. It’s not often one can be part of something this good

Doing a great job so far! The journey is only beginning.

squirtle and all the VR headsets… hmmm…

Handsome pic, but the real question cannot wait for days: Does that plant need more water?

When are the monolith changes going to be implemented ? The hype is real :’)

Did you really just drop this bomb on us? You mad man

The announcement had a rather weird form. ^^

No, apparently one of the devs announced it on @LizardIRL’s stream last night.

The announcement had a rather weird form

I wouldnt use the word weird. It was a very fitting way to do it with lizard. I would call it unique though!

English is not my language, so I’m not good with some precise meanings. ^^

Handsome pic, but the real question cannot wait for days: Does that plant need more water?

Am I allowed to say I was surprised how cute he is? Not that software developers can’t be hot, it’s just kind of distracting.

I’m probably going to miss it due to time/work, so can someone please ask for an update on multiplayer?