Has anyone tried a Rive build?

I have been playing a Void Knight character since Alpha 0.5.1. It is probably your typical Devouring Orb/Abyssal Echoes/Tempest set up. However, last night a was playing around and testing different skills and was quite surprised how hard Rive hit.

Now I am looking at seeing what kind of character that I can create using Rive as a primary skill. There is no skill tree for Rive, which is what makes it interesting to me. There is no bias in the way it can be developed.

My current idea is to use Rive with Ephemeral Stance and Devouring Orb to pump up the damage.

Has anyone tried such a build? I am curious as to what the results were.

I do like Rive. I tried it out last night with my current Void Knight which is far from optimized to use it.

It hits a lot harder than Tempest and has a higher DPS, especially when it crits.
Lacerate is crazy good compared to Bleed. It is inflicted 100% on the time and was doing 230 damage over 2 seconds vs. Bleed which only has a chance to occur and was dealing 98 damage over 6 seconds on the same build.

THe ig issue with Rive is that you are a statue when you use it. Postioning is important, I kept having to run after Scholars and Void Leeches beacuse some were outside my range when I started killing the mob. Also, Stun Avoidance is key. I was using a Tempest build so had almost no stun avoidance and got stunned a lot.

Personally, I am looking forward to seeing what I can do with a build around it this weekend. It is definitely a skill that you have to make a build for instead of just switching gear to make it work.

Also, Stun Avoidance is key. I was using a Tempest build so had almost no stun avoidance and got stunned a lot.

We’re aware of this and plan to make melee characters less vulnerable to stuns.

In my opinion, the issues with Rive are twofold (though perhaps solved when it gets a skill tree)

So I did some testing and calculations using the white Broad Sword that the Knight gets at the start of the game. Here is a comparison of Attack, Rive and an unspecialized Tempest. 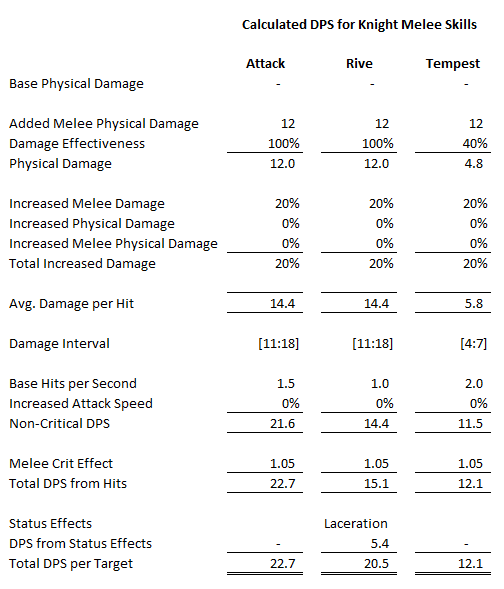 Rive and Attack do more DPS than Tempest in the early game. The advantage Tempest has is mobility. Tempest also has a skill tree, but comparing the other two to a specialized Tempest is like comparing apples to an apple tree. That being said, it will take a some points in damage nodes for Tempest to catch up with RIve’s DPS.

Right now, Rive looks like the better mob clearer, and Attack the better boss killer when working through Chapter One, and maybe, the first levels in the Arena.

I feel like you have to consider specialized Tempest, though. As it has added damage in its specialization tree available immediately- which adds, I believe, 3 additional damage per hit per point, and isn’t effected by the normal added damage effectiveness modifier of Tempest. Even one point in that puts it above Rive in DPS. And its available at level 4.

Actually it takes 2 points in Void Spiral (4 void damage) to surpass the DPS from Rive. However, you are neglecting that you are using 20 mana/second with Tempest and will not be able to maintain it forever versus zero mana cost for Rive. So while you have increased your DPS past Rive, you have done nothing about keeping it going.

As I said, there will be a point when Tempest is clearly better, but you probably won’t get there until the beginning of Chapter 2 or so.