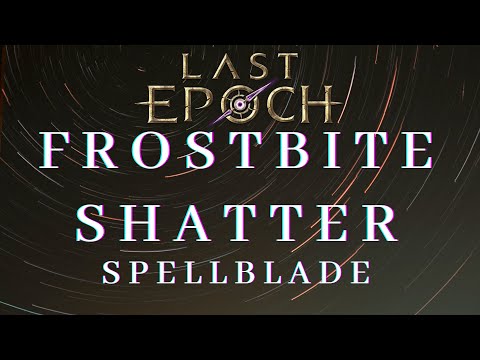 Send your enemies to their wintery deaths with this shattering build!

Come join me on www.twitch.tv/amarathy

First thing I thought when I looked at the video was: “Damn, this looks SEXY!” Didn’t know Spellblade could look that cool.
The build is very strong, 7k ward is nuts! The only two downsides I’m seeing are

Snowdrift is one absolutely busted unique, indeed. Wanted to make a frostbite Ice Barrage Sorcerer build with it since it was announced, but the farming for it goes kinda slow. Managed to find 1LP Snowdrift itself though

Blockquote 1. That without ward it’s rather squishy and there’s a small chance to die before you could start generating ward (i.e. to a large pack of arena archers, or something like that).

It can happen in monos when you’re fresh but just remember to hit that Flame Ward nice and early before you engage. Arena is not too bad as the ward retention really does good work here. Last patch the build was comfortably able to sit above 15k ward until things like crystal ele’s appeared at 250+

The boots definitely open up some amazing combinations, I’m doing a similar set up on the swarmblade at the moment

I am currently levelling with the build, and just about to reach Lagon, and so far the build feels quite solid but sometime squishy without enough ward since I have low resistance at the moment.

Just wondering if replacing Humming Bee with a 1H sword with 1.2 attack rate with Cold Damage (T5 with up to 105%) and Melee attack speed (T5 with up to 26%) affixes will be stronger in term of frostbite damage? Not sure if losing the ward on hit and movement speed bonus is a big deal or not.

Also, since the intelligence stat doesn’t affect frostbite damage, I suppose it is mainly for ward retention right?

Anyway, thanks for the build writeup, the build is very SEXY and I am liking it very much.

Blockquote Just wondering if replacing Humming Bee with a 1H sword with 1.2 attack rate with Cold Damage (T5 with up to 105%) and Melee attack speed (T5 with up to 26%) affixes will be stronger in term of frostbite damage? Not sure if losing the ward on hit and movement speed bonus is a big deal or not.

While levelling i’d replace the swords for sure with more added damage. You really want all the uniques in the build before swapping into the frostbite version

Blockquote Also, since the intelligence stat doesn’t affect frostbite damage, I suppose it is mainly for ward retention right?

It does! relevant main stat and more damage modifers within a skill tree also apply to the ailments and subskills.

Well, I did some testing by replacing Humming Bee with 1H sword, the maximum sustained ward on single target is noticeable less and I am moving slower without movement speed bonus from Humming Bee, but I get a much consistent damage output for frostbite. So far I have all the uniques, except the glove which I am going to farm next. Dropped the unique idol yesterday without expecting it.

For the Intelligence stat, from what I noticed on the dummy, the 4% increased damage per Intelligence doesn’t seems to apply to frostbite damage. Based on the node description, the Volka’s Razor node from Spellblade passives also seems to only apply those 150% damage to frostbite inflicted by Shatter Strike but not the frostbite inflicted by the Shatter Strike Icicles? Now, I have no clue which one is affecting the frostbite damage.

The 4% damage per attribute does apply to Frostbite but as it’s another increased damage modifier it’s added in with all the others from gear and passives so is unlikely to be noticeable.

I love your build but be warned it will kill your performance.

I run 4k with 40-60 fps in combat on most builds. This builds dies down to 15 fps at 4k and crashes the whole game like once n hour.

…arghh… I am wounded… that bit deep friend…

I specced out of the ice shard shooty stuff and grabed a lot “more” stuff on shatter strike.

I enjoy this Version far more and not getting 15 fps when the screen is full of stuff and actually being able to see stuff is a plus too.

The Interaction between Whiteout and Frozen Shrapnel is still bugged, despite being acknowledged by the devs back in april. Frozen Shrapnels triggered by recasts will not hit enemies. You are only getting 1 additional proc from this, not 3.

How about using Frozen Ire + Humming bee it should ez cap necrotic res, give a lot of freeze multi → frostbite effect and tundra nova is a cold hit so it inherits all the frostbite on cold hit. Also it can proc off both icicles and shatter strike since both are cold hits. Assuming you can manage the loss of some ward on hit.

Frozen ire is good but I wouldn’t anticipate it being better than the humming bee due to the attack speed base and affix. Plus your ward per melee hit is very limited.