Hungering Souls has a long history. It is one of the oldest skills in the game, and because of this it is generally regarded as bad. Which is true, it is one of the worst skills at Acolyte’s disposal. But thanks to Death Seal it has been given a new life. As you can see our Death Seal makes us fire off almost twice as many hungering souls as normal, allowing the single fire hungering soul playstyle to manifest.

Normally this build would lack severely on clear speed, as since its 1 projectile per cast, you can’t really clear well with it. But thanks to Bone Curse and the one node that makes it so there is a 25% chance to explode with physical damage to nearby enemies, it allows use to clear trash a lot easier than before. This on top of how many Souls we can pump out thanks to our cast speed, almost solves all of our clear issues.

The main fault of this build, as with almost all lich builds now, is when you are out of Lich Form and are on cooldown for Death Seal, you feel like a paper towel in comparison to when you have both of them up. But when everything is up and going, and you can see the large amount of soul spam, it is rather satisfying especially thanks to the updated fire visuals on Hungering Souls.

The biggest problem I have with this build, is the lack of skill points inside Hungering Soul’s tree. Its hard to grab everything important, and even with +2 to hungering souls it is still impossible to grab everything you want. This is due to the old skill design Last Epoch had about a year and a half ago where a lot of skills would have large amounts of point dumps, where you put 5+ points into a single skill to get the benefit of it, along with large amounts of travel nodes. Now in the recent design it seems they avoid this trap a lot better so I believe when Hungering Souls eventually gets reworked, maybe they take this into consideration.

Sadly this underperforms in comparison to other lich builds, and if you want the best of the best for monolith farming, I would suggest playing the other version, Arborus’s monolith runner, as that is better for overall gameplay. But if you like Hungering Souls and you like the visuals, I couldn’t see why not you could spend an afternoon having fun with Flaming Skulls of Doom.

Leveling Guide, Finished Build Planners and Loot Filter in the Description of this Video : 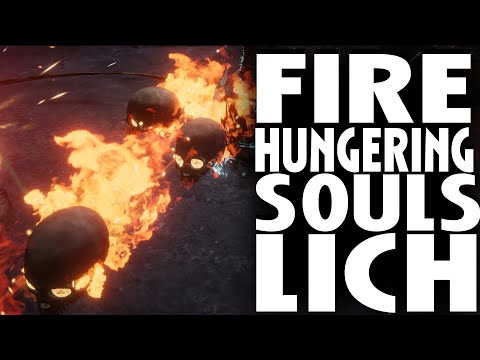