I’m looking through the character stats and I’m noticing a lot of repetition in what is displayed, particularly in damage stats/minion stats.

All of the damage stats are some variation of “Increased [Skill Type]/[Damage Type] Damage” and minion stats are all the same, just with minion added in front of them.

The suggestion would be to create dropdowns which include the variables that are used frequently for damage types. This would allow players to find the stats that are important to them, reduce screen clutter, allow more modifiers to be presented in the stats window, and make it clearer how these stats interact with each other.

A complete line would look something like:
Increased [Minion] [Skill Type] [Damage Type] Damage
where the brackets would include all possible variations and “None”

A player could select from the dropdowns something like “Increased Melee Lightning Damage” which is a thing, however not actually present in stats window at the moment.

I’d rather be able to see as many different stats as possible on a stats cheet in order to easily compare them, see if some unexpected stats are present, etc.
Having to change every parameter one by one is an unecessary hassle. :s

I don’t see any reason why there couldn’t be both.

I imagine it being it’s own separate tab sort of thing. 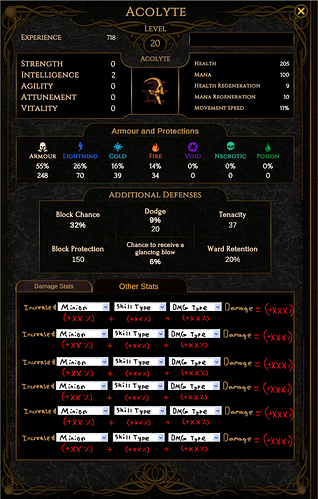 This could be in addition to the current tabs…

or the math works out that this actually displays more stats in a more compact space.

Currently the stats that could be put in this tab take up an entire tab by themselves, however they don’t have as many variations. There are currently 19 such stats in the window. 7 damage types, 3 skill types, 7 minion damage types, and 2 minion skill types. If there was one more row in my picture all of these stats could be displayed at once in the same window. This design is also more conducive to have a scroll wheel, meaning even more rows could be added. In addition to being able to have the same skill stats displayed, there are 56 (2 * 4 * 7) combination stats that could be shown that are not currently in the stats window. Some of these stats don’t exist atm, but a lot of them will. Displaying these stats would require an additional 2+ tabs using the current stats display format.

On the subject of the Character Stats UI:

The “Other Stats” tab is currently occupied by a large number of mitigation on block stats. These could be incorporated into the armor and protections section to improve visibility, comprehension and screen real estate. 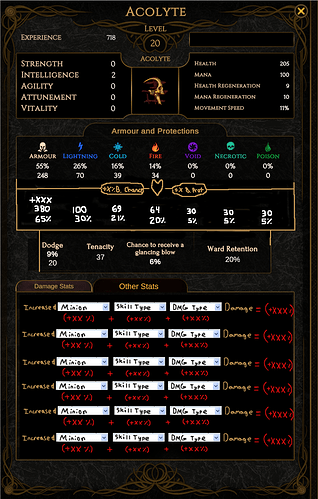