I am trying to understand why the skill Disintegrate shows a sheet damage of 27,089, yet by all my calculations the skill only does around 8000 dps maximum. 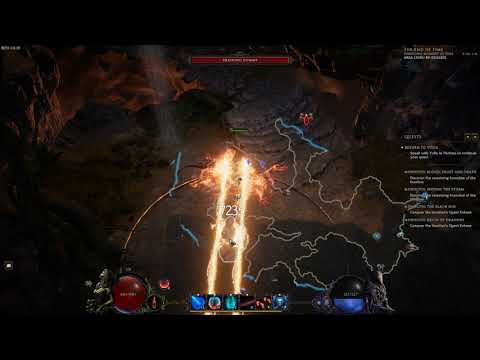 Above is a 15 second clip of me using disintegrate.

I am certain both beams are hitting as prior to recording I tested the tic damage of one beam. After the first two seconds Escalation activates and my damage goes up, but this buff to the skill isn’t even considered on the sheet damage until I get the buff. I am calculating the dps based on the number of tics of damage over the course of the time after the Escalation buff begins. (If I take Escalation into sheet damage, it should be 33k per second) Yet even so, my damage still falls far short of the amount shown by the original base sheet damage.

When I made this character I made it for flat spell damage and channeling Nova. I have reworked my passive skills to focus fire, but most of my gear still works with spell damage or elemental damage. Either way, this shouldn’t lower my output.

So why does the skill, when hovering, show 26k+ while the best I can calculate is approximately 8k? Meanwhile Nova shows about 3k and delivers exactly that amount of damage…

Is the sheet damage calculation for Disintegrate just that jacked up or am I missing something here?

Does the sheet damage also calculate fire aura from Inferno? I thought fire aura would be considered it’s own skill… If I cast whirlwind on a sentinel and trigger smite, it doesn’t add smite damage to whirlwind calculations, so why would fire aura be added to Disintegrate calculations? If this is the case, it seems very disingenuous and misleading as far as the sheet damage is concerned.

It would be display thing only I guess. If you see it in extremely slow mode (pause/unpause while at 0.25x speed), you can see ignite ticks if they are not overshadowed by disintegrate ticks (look from 0:02 to 0:03 s). Also, it can also be caused by ticks not showing damage properly due to the same thing (lets say you proc damage 5 times and it only shows the last hit in the 1 sec period). That is just my guess and you should wait for further confirmation.

EDIT: Some spelling relicts and errors.

IMO, base on the skill’s interval is 0.25s shown on toolsplanner, guess meaning it deals 4 times damage over 1 sec. the sheet tags 27k shown its 1 sec damage, not 1 time damage.