I recently watched a video of the pre-alpha version of the game and I immidiately noticed that the damage numbers felt a bit more impactful and satisfying to watch than they currently do. I think one of the reasons for that might be that they had an upward pathing-motion and that they remained static for a while.

Right now I think that the numbers drop down and fade away far too quickly, causing them to feel “weightless” and non-impactful. 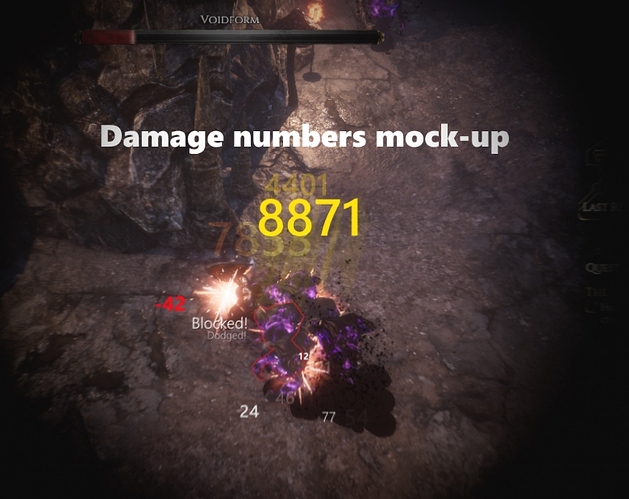 Like in my mock-up reference, maybe having a combination of both would be nice. Bigger damage numbers (like crits) going up and staying up for a while (like they used to) and smaller damage numbers moving down like they do now (but a little slower). Status effects like dodges/blocks could perhaps also be more static. I exaggerated the size of the numbers just for clarity.

I know that things like this are highly subjective, so I don’t know how other people would feel about it. Maybe having some customization-options when it comes to damage numbers would be something worth having.

Also have to agree.

That being said I realize that preformance is the key issue. And these types of changes might hurt performance quite a bit. Which is why I imagine the damage numbers are no longer how they are in the screen shot you posted.

In previous patches the damage numbers caused fps loss. Above all preformance is number one priority.

That might be true, but a lot of games like Grim Dawn and World of Warcraft make use of similar combinations of static and randomly moving numbers to a great effect without any noticable difference in performance at all.

The system can be really helpful in reducing number clutter and improving readability, so hopefully it’s not a game-engine/performance constraint.

Hey @Hex - I really like the look of that. The damage number performance issues were solved after a rewrite of the system so the display can look any way we like without issue now. I’ll put this in front of the team and see what we can do

Letting the player set the display time would be the right compromise.
To avoid this drowning under the numbers.

To avoid this drowning under the numbers.

Could you tell us about the build you are using in these screenshots?

there is so much number that the game slows down strongly by the moment (freeze same).