So I was told that people actually read written guides? For the longest of times I stopped making them because it seemed nobody read them or cared, so my time was better spend making the video associated with the build. Prove me wrong and read the post, and I will probably make more written guides in the future

Storm Crows are actually cool, and I’ve enjoyed them immensely here. Hopefully with some more gear I can finally say I made non snapshot crows t4 jurla viable.

Thanks to the mini rework of Swarmblade in patch 8.5c, we now can gain rage on Locust summon, meaning we do not need to run Eterra’s Path or a large amount of critical strike chance support to allow us to stay inside Swarmblade form while farming monoliths. This reduces how much investment we need to remain in form.

Crowstorm is a companion ability, that when used will create a large lightning aoe that scales with Storm Crow’s minion lightning spell damage, and it also gains 50% more damage per contributing crow. I thought this was the case before I played with it extensively, but Crowstorm is one single hit, not multiple. Hard to tell because the animation but that is the case. One big hit!

So the normal version of Crowstorm (that barely anybody plays for a reason), you need stuff like Eterra’s blessing to bypass the Crowstorm Cooldown (which is like 6 seconds with some investment),

but it costs an insane amount of mana to do so. Thats why we are Swarmblade, as it allows us to use a Crowstorm every 3 seconds instead of 6, and it also costs no mana to proc, allowing us to actually be able to spam it. Now since we are forced down to only 3 crows (4 if you use the summon wolf bug, yes it is a bug), it means we do significantly less damage than the Beastmaster version…but we pretty much get to spam Crowstorm like twice as much, so its great QoL and we have access to entangling roots which is like 40 adaptive spell damage, which helps us catch up to Beastmaster’s damage output.

Pros of the build :

Cons of the build :

1a. crows are naturally squishy and need investment not to die constantly

build health regen because slots are too tight and too expensive

Crows are normally squishy and how to fix it and how to ignore snapshotting :

Well Crows have some of the lowest base HP in the entire game, so they require a bit more investment than your normal build to function. Attribute stacking (strength and attunement in this case) which Druid is good at doing, is the best way to keep your crows alive. It gives them a large amount of base HP to work with, which then if we get close to like 700%-ish increased minion health, I think you’d be happy then. We also use a ribbons of blood so they won’t be crit, a reach from the grave so that they have leech from their attacks, and a Jurla’s obsession with some resistances which are normally hard to get, it means the setup I have for crows are a lot more durable than most people’s setups. Right now I have like 400% inc minion HP, but if I got minion HP on the chest id be at 700% easily.

How we fix our sustain and defenses :

Maelstrom healing is our main sustain source. Since with stuff like Aspect of the Boar and Impervious, along with Serpent Strike armor stacking, it means we become pretty tanky for a minion build. Sadly Maelstrom healing is our only out, as all the other sources of sustain for a minion build are locked away with really really good gear (like HP regen on an Artors and Jurlas obsession)

So thanks to the nature of transformations, they allow you to constantly spam Swarmstrike and Crowstorm, as cooldowns are reset when you enter and leave form, so we leave Swarmblade form, use Entangling Roots, use a Crowstorm, use Entangling Roots again, then swap into Swarmblade Form (which will proc a Crowstorm so be ready to place it), then Swarmstrike again, then of course Swarmstrike again, rinse and repeat. Really fun to do, feels like you are rewarded for form swapping.

How we solve our minion crit :

Storm Crows are nice enough to give a lot of their own base crit inside their own tree, as we can easily get close to 40% base crit with the nodes in the lower left of the tree. Its a 20% chance on melee hit to gain a bunch of base crit for 10 seconds, which stacks to 3 times, so as long as we are melee’ing enemies (which we are thanks to serpent strike and swarmstrike) it means we are close to capping our crit chance with a few idols or a Jurlas Obsession with crit on it.

Focused Wrath’s 30% reduced rage decay is very important, as it allows us to sustain with only Locusts while in Swarmblade while monolith farming, while on single target it doesnt matter because we are constantly leaving and entering Swarmblade form as it fills us up to full every time.

Impervious is insane for us, as since we are constantly attacking, the DR is up all the time.

Aspect of the Boar is of course Best Boar.

Attribute stacking and healing effect on the tree are very valuable, as its stacks we need to make the build feel good.

What legendaries/uniques you want and need :

Artor’s Legacy, Reach from the Grave and Ribbons of Blood are mandatory in my opinion, while Jurla’s Obsession is a flex spot. You don’t technically need Deathrattle, and when you get minion crit multi on chest and helm you won’t need this.

Body Armour is the most important slot for the build :

We can get +1 to storm crows sealed, Minion crit multi and Minion Health %, which are absolutely insane for us. We don’t need +3 to crows, more like +1 to feel comfy, so we’re completely fine only having a T1 on our chest. Didn’t get one so I used the one in the video.

Minion Crit Chance on prefix with Healing Effect on suffix is our most important setup. a throne of ambition goes a long way on single target.

If you enjoyed the post, go to the video linked above or below, leave a like, as that’s the best way to support my efforts here making posts or of course making videos and these builds.

YT video with gameplay of the build : 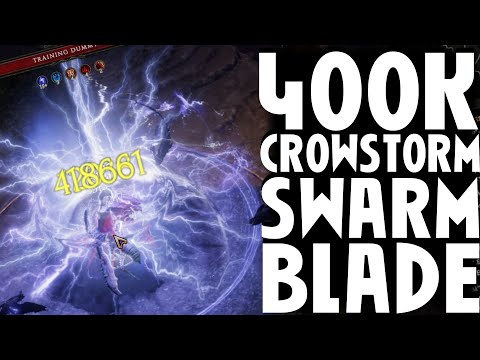 nobody read them or cared

That makes you 1 in a sea of others

I always prefer a written guide to a video (Ain't Nobody Got Time for That!-Original - YouTube) but thats probably something to do with having grey hairs…

So I was told that people actually read written guides

Much prefer them over videos, in the videos, I just watch/listen what the build can do then skip to gear to see if I have what’s necessary unless I feel like doing a solo. I don’t want to spend forever listening to backstory, the mother’s father’s sister’s brother who inspired this build and their outlook on LE. I know some people love that stuff though…me not so much.

I don’t mind spending time on written guides. I just know for a very long time I was making them and spending a lot of time on them for what seemed like no reason. Glad to see they are actually useful.

I have to say I’m liking your video because of the intro…was gonna skip until I saw the most bootleg MTG/Pokemon/Yugioh card chase, got a good laugh out of it.

I try to make them entertaining as I know that it does get boring, showing build after build…

I know everyone’s different but I liked it and I consider myself a cynic when it comes to videos on builds, I don’t waste even a second to skip until I see the build in action which is what let’s me know if I want to continue watching or not.

I don’t mind spending time on written guides. I just know for a very long time I was making them and spending a lot of time on them for what seemed like no reason. Glad to see they are actually useful.

Count me as another one who loves reading your written guides. I just get mad that I don’t think of your ideas first, and then if I want to incorporate them, I’d just end up copying your builds, then all I’d be is “that guy who just copies Epoch Builds” instead of someone who does things on his own. It’s crazy how many original and well-thought ideas you bring into this game!

it seemed nobody read them or cared

Nobody shall be my name, then.

I’m really interested in this build, though I’m starting a character from scratch in Solo. Would you suggest anything till I get the buy in items you deem are necessary for the build? I know this is a big question. lol Feel free to say don’t XD

Hi! Can anyone share filter for early endgame < (around 300 stability 1 region)? I have not much time for games now and if u using something good and ready I’ll be grateful.

So, if you use it, be sure to check that its not TOO strict

I know this ;p but it is too strict and automatically generated with big error range(not key stats). Ok I’ll try some changes cause actually showing anything . thx anyway