Cinder Strike Ignite Marksman, Finally After Half A Year Good Enough To Showca

Finally a cinder strike setup that doesn’t make me want to throw my pc against the wall!

shhh… quiet… or the devs will hear you and mess up our fun!

It’s too bad there are 2 bugs holding up my build:

Yep. Tested about 100 times just to be sure.

See title, very self-explanatory. Decoy’s explosion should gain (with 4 points allocated to Smoke Blades) +200% increased damage after 4 seconds in the smoke (4 blades stacks, +50% per stack), but does not.

Per a conversation with Mike on Discord, Cinder Strike’s Burning Daggers aren’t currently getting any benefit from the Fire Walker (% fire DoT per point of dex) node & they probably should.

Wow that would have been nice to know!

Yep, i was also surprised when Llama mentioned that, because with dot builds its always hard to see those numbers while testing on a dummy.
So this could actually increase the dmg quite alot for ignite CS.
Hopefully it will get fixed next patch, ignite cs was my first marksman love

(ignite needs a buff too cough)

Might it be worth doing the armor bonus trick with shurikens and shift over speccing Decoy? I doubt its that much of your overall damage. Not using it to create shadows. Plus the shurikens carry all your ailment chance so enemies that rush up to you will get hit up to 5 times right off.

actually the main reason we use decoy is it is much better at clearing than Cinder Strike. Its kinda carrying our clear especially since we can’t pierce with the daggers from Cinder Strike.

Oh I see now. With Kelthan blasting agent its cooldown is halved or better. So you took the ignite stacks with the extra decoys so 15 ignite stacks just from that and the decoys. Plus they carry all your ignite chance from other sources.

Ok that leads to my next question. Why so much investment in the Decoy explosion damage in the skill tree then? You have no added throwing damage so it can’t be worth that much, its an ignite carrier and a good one from what I can see. Wouldn’t you be better off getting fire resist shred and frailty? Or am I underestimating its base damage?

Assuming the explosion damage modifiers also affect the ignites that it applies, he’s getting a total of x2 x1.2 x1.1 x2 = x5.28 more damage from the tree which is way more than the 40% more that 20 stacks of fire shred would give.

Yes they all do apply to the ignite.

Now that is unexpected. Its listed as damage to the explosion. Usually stuff like that doesn’t transfer to ailments.

Short question, why there is any focus on poison chance (from tree and bow base)? There is no poison conversion as far as I see. Also, we spend some points in smoke bomb in poison chance, but we don’t scale it at all.

And to addition, is jade arrow provide so much benefits? My logic is that jade arrow bonus applied only to arrow itself, so enemy will have 20 stacks of fire, 10 of them will be affected by boost and others - not.

Cinder Strike has a node called ‘‘Flammable Toxins’’. It converts all sources from poison chance to ignite chance for cinder strike.

Ok, that is for tree and bow\quiver, but poison on smoke bomb is local and unrelated to cinder strike at all, because you poison by smoke bomb and not while inside smoke bomb. 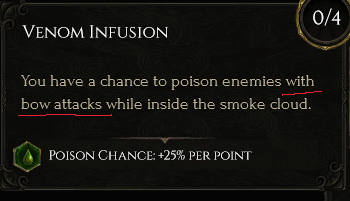 No, it’s quite clearly increased poison chance with bow attacks while inside the cloud.

Yeah, I for some reasons assumed that it is poison chance per second.

Also, then short question, why there is still poison applied to enemies, while I use only cinder? Is it because of fire daggers, like they are not affected by conversion?

No, fire daggers should be affected by that as well. Are you using something like Shurikens/Blade Shield?