Sorry if the title is not putaclic I missed my youtuber diploma.
I start on a note of humor because salt is coming.

So I don’t know if this is a bug, but it drives me crazy.

I play a cac person, who additionally uses abyssal echoes, which packs mobs around me. I use my rive attack that doesn’t need to be targeted to cast. But my asshole character gets fucked hard but he tries to RUN. Asshole bangs. Its what I scream every time.

Why these morons of character cac this put to run like this in the middle of a pack of mob. I guess my mouse is hovering over a mob out of range and that moron agrees that I ask him to type the one precisely, and since he can’t he tries to get close, but he can’t either so I’m dying like shit! And it annoys me, damn we are in a hack and slash what to aim is useless, you bang in the pile.

It could be laughing at, but it’s really very annoying, how many times I get bitten because of it, and I had to spruce up 4 levels of monolyte … 1 Time you laugh after a moment you want to peter your keyboard on the head of a dev for having done his.

irony on
It’s like driving a car, you either know where the brake pedal is, or you don’t.
irony off

You could also just increase the range of Rive or not put everything on the left mouse button for once, or…

…for a change, leave another class(/ability) “on it”.

Sorry I did not understand.

For info the range of Rive is at the maximum but its does not change anything and like Rive is not on my click but on A and it is also the same concern.

So sorry if I misunderstood what you mean but from what I understood you were wrong, I am a clown but still. I don’t do anything with my spells. So I assure that there is a real concern and that I am not trolling, if you have never known this it is strange, either play you full range, be you pay attention to or aim at you with the mouse , me no, I am not on an fps, I aim a little ready to give a direction of strike that’s all. But the concern is precisely when it passes over an enemy in the distance and I am a creep block, in vain I spam my A, so rive, it does not attack and tries to run towards the enemies that I “target” without do it on purpose, and sometimes this enemy is close but stays too far from Rive.

Sorry, if I take your message the wrong way, but I have the impression that you are laughing at me, while I try to expose a concern that is genuinely bothering me. After that I may have misunderstood in this case I apologize.

There is a “Bug Report” -section for isues on this Forum.

(I would never use irony there.)

ha you talk about the section never read, or even commented on, so in my opinion a lot of people in we have nothing to do.

It is for this reason that I am not posted in bug, the second is that I do not know if this is a bug. And also that I wish to have the opinion of another person, if precisely of other one already saw that. and as I said it is not in this section that I would have answers.

I’m very sorry if I am misunderstanding your problem. I wonder if you have tried changing this setting to see if it works better? 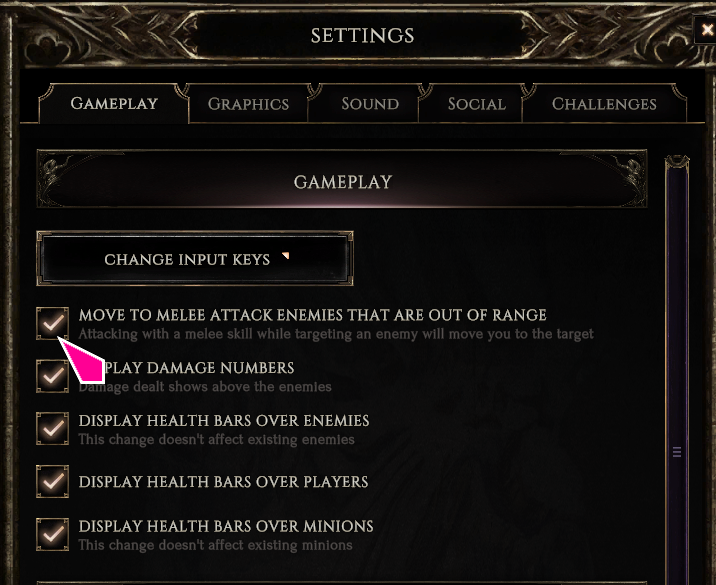 Thank you my friends you saved my life.

I did not see. And that is also a reason why I am asking the question here, because it is possible that someone is a simple solution.

Afterwards without resentment, I am nothing against you. I just didn’t understand your reaction, but I also think translators don’t always help and I know my sentences sometimes don’t make sense. In short, I am not a bad person, thank you all the same for answering.

Could someone explain to the middle aged man what “cac” menas?

The only issue with the “move to melee range” is that if you’re attacking something in melee range & have your RMB held down, then it dies & you move your mouse (with the RMB held down) on to a different mob that’s not in melee range the character often won’t move. The same applies if your original target moves out of melee range.

And having a melee skill bound to your LMB isn’t going to end well on Lagon if you need to move to avoid one of his attacks.

Rive has problems with targeting.
Simply allowing the game to ‘move to melee attack’ is not reliable. a lot of the time the Sentinel simply swings in the air.
To play him effectively you need to make small corrections with LMB to be in the right place and then, as Llama says, you may have to release the button you are pressing to attack, then press again when you are a few millimetres closer. The problem is less evident if you spec the extra range nodes, but still there. Rive performs quite differently with the different ways the game allows you to use it. LMB/attack option does not work well with Rive the way it is programmed right now.

The only way I found to play smoothly was WITHOUT the option “move for melee attack” ticked. LMB move, and then press a button to attack and stop pressing LMB.

My gut feeling it the ‘move to’ radius of RIVE needs to be much tighter as it fails to connect with the monster hitboxes with that option during busy combat.

I use similar build, what i do is i have launge x2, i use launge to get in to mobs and rive i have put on keypad insted of mouse since I do not think melee attacks are optimized to use on mouse since as u said it attacks instantly instead of going to mobs and than attack. For me works like a charm, positive side of using launge is as well that u dont need to invest in passives on movement speed since double launge is your move speed, but make sure your char can tank all empowered bosses since u will have a hard time awoiding their attacks especialy if u use auto cast. U may wonder why i put it on keypad (rive) it simply couse of mentality since if i put it on right mouse botton i would do the same thing as u since i would always expect my char will run to mob and than hit, its just habbit that we learned form other arpg, but on keypad in all games i always use type of attacks like explosion corpses, novas, and similar attacks where u dont have abbility to move, its just way my brain recognizes different type of attacks and there for i do not have problem with rive in this way. I hope that helped.
Cheers

It’s not specifically a Rive issue, it’s all melee skills (that I’ve used).

Wow hahaha i never so it eather, i will use it now this way lol thanks man

Could someone explain to the middle aged man what “cac” menas?

I have this setting enabled and relatively often it does not work. So many times I’ve seen a character riving or swiping the air, two meters in front of an enemy. ^^

Excuse me CaC means something else in English?
For me it means melee or “body to body” as shtrak says

But for me the problem is resolved since I uncheck the box. My character doesn’t run like an idiot anymore ^^

Excuse me CaC means something else in English?

It doesn’t mean anything in English (which is why I asked), though in British English it sounds like a word for s**t.

Hoo ok. So know that for us French it is the diminutive body to body. Or to speak of a melee character.

Actually, in english CAC is quite used. Mainly for military usage. Name the CAC Cards.