That is amazing, normal echoes are super fast now, which is fine both for veteran and casual player.

But empowered now are a little bit more of a endgame great. Perfect balance!

You guys pumping out those patches in no time!

Fixed a bug where using skills (especially movement skills) with a controller could freeze/crash the game in certain situations.

Clutch. Now I can pick up some builds that I set aside due to crashing every 5 secs. I know you guys want stay away from zoom style gameplay but completely killing the .exe to was a little too drastic to make your case.

The state of a quest echo is now reset each time you enter it. This fixes various problems, such as objective indicators not appearing in a quest echo if you had previously abandoned the echo, or if you switched to empowered before completing the whole quest line.

Wow so fast! My softlock is gone!

Hehe, just kidding. I’m glad to see so much activity and response.

What comes after patch 0.8.2z though?

thank goodness for this patch and the controller support fix !!!

Omg finally! Thank you so much

I truly hope LE doesnt become a hub for elitists, like POE has become.
sigh

Big THANK YOU for your constant work!

the new chat not auto-scrolling is known issue?

Empowered timeline 3rd quest echo stability requirements now range from 750 to 900 (from all being 750).

750 was just fine. It takes loooong time to get blessing and/or items you want and you are still making it longer. Not a fan of this change.

I noticed the chat lagging again. Last night a dev said something about a charity stream, then everyone started typing ”<3” and it literally took 20 sec to freeze. I had to disable it because I was droppin frames like crazy.

If you continue outwards on your mono web after killing the boss then you’ll be getting around 30+ stability per mono rather than resetting the web with a shade and going back to 10 per mono. So running monos for blessings should be quite a bit faster than before 0.8.2.

I’m not resetting MoF just for that reason to get to 30+ stability nodes but even than it takes more than 30 runs to get to 3rd quest. Not to mention with increase of stability suddenly you get more hard modifiers even if you avoid corrupting MoF. Try running Spirit of Fire and see for yourself how long and hard it gets even without extra corruption. Farming for 10% chance items or certain blessing got much harder and longer to do. Not fun. Imagine new season where you have to grind blessing and/or items every single time. If that’s what EHG believes is fun I’ll just pass. Might as well just play PoE.

I’m not resetting MoF just for that reason to get to 30+ stability nodes but even than it takes more than 30 runs to get to 3rd quest.

Given the 3rd quest for the lvl 90 monos wouldn’t spawn until you’d done at least 25 timelines then you’d have a % chance of it spawning, I don’t think that having the repeated runs of a monolith take up to 30 is too bad (especially since you’ll spend most of your monos getting 30-40-50 which would reduce the number needed further).

I’ve just checked on a character that had been working on the empowered Black Sun & he’s at 40 stability per mono with a required stability of 800, that would be 20 monos required if I went “sideways” and only did ones that gave 40. If I continued to push outwards & was getting 50-60 stability, let’s call it an average of 50 for argument’s sake, that’s only 16 monos.

Running empowered monoliths to get a better roll of a desired blessing is an endgame activity for min-maxing a character that’s already at a fairly high level of power (ie, can cope with doing the higher stability monoliths) & I don’t think that somewhere between 10-30 monoliths per blessing is particularly unreasonable & it’s going to be faster than before 0.8.2.

For sure, its absolutely reasonable. But I think most of the frustration with the idea of runs taking longer (certainly as someone who has been farming a lot for a few days) with the way the Blessings are handled after the 3rd Quest Echo, rather than the business of actually running the echos.

I wouldn’t want to derail to that point from here but its been raised separately from a few different angles, all ultimately related to things like trying to get a better roll or a blessing from the 2/3 slot pool.

Edit: I probably derailed so will delete if necessary!

Heres an example of an empowered (Age Of Winter) i just finished : 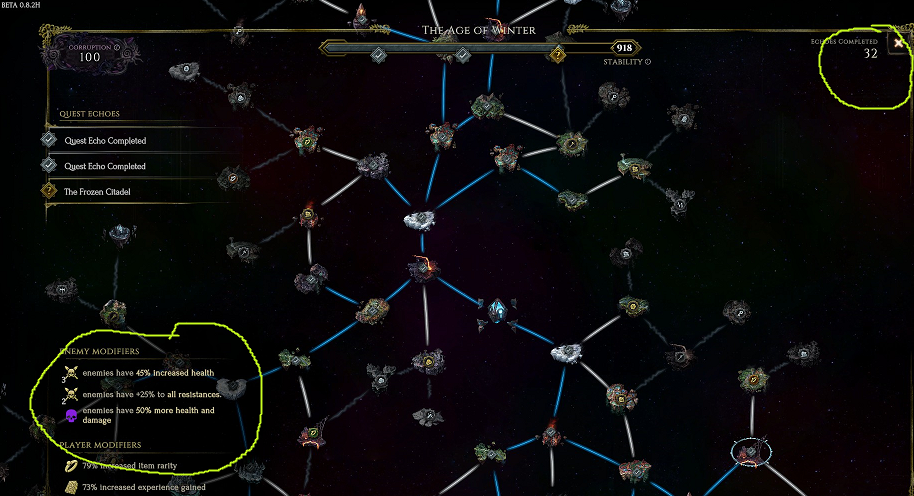