Build Summary :
So Aspect of The Shark was nerfed in 8.3. It was reduced from infinite stacks to 10 max stacks. To help it out after completely destroying that version they also changed the base 50% increased melee damage to 75%. Which with this, it actually buffs this build in some ways. Having a quicker ramp up is better for monoliths, as we felt like a limp noodle most the time in monos thanks to not being able to consistently get over 20+ stacks. But now that each stack is better, it makes the times where you feel good last longer and easier to get to. They also nerfed Crystal Swords so its just better to run different weapons.

We are also using new techniques that I used before hand in the Necrotic Wolf Beastmaster, as we can use the Wolf Howl + Frenzy Totem to cap our crit out, meaning we don’t need to run crit chance anywhere on gear.

All of these come together to make your swipe insane for clear and deal decent enough single target. But now we talk about the biggest addition to the build.

Since we are gaining mana with Swipe, we actually oversustain the warcry + frenzy + howl combo, meaning that we can run something else, which is Earthquake.
We set up EQ for the triple cast, as we have so much attack speed we can weave it in constantly on single target, and can just focus all of it on single target damage as our swipe does most of our clear. It raises the build to a whole new level of insanity. Not only do we have the big smacks, we have the fast attack speed and also the fast movement speed as well. So overall the build is much better than last patch.

One other neat thing about this build is thanks to all the leech on the tree, we are actually very tanky. We can face tank stuff like Orobyss and big packs in monos, and we also can tank all of elder gaspar’s attacks except for the beam (which most builds can’t deal with), and since we have some decent minion health regen affixes our wolf barely dies either. 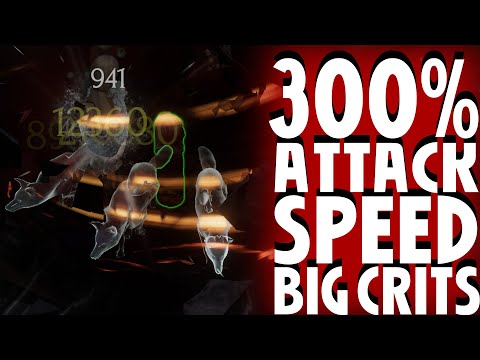 If nobody else comments on this build, I want to say I’m always impressed in how creative you are in your skill tree application, especially for having a solo Wolf who’s used as a Howl buffer and otherwise is just meant to stay alive.

Do you think the 3 T5 minion regen affixes are necessary for the Solo Wolf, especially when it has that much Health Regen bonus on the tree itself? If that’s the case, it’ll be hard to keep other pets alive outside of aiming for 100% Crit and Leech. I know you’re aiming for 300 Corruption, but what if you’re someone like me who’s perfectly fine with 150 corruption?

I’ve found 2 is necessary and 3 is comfy.