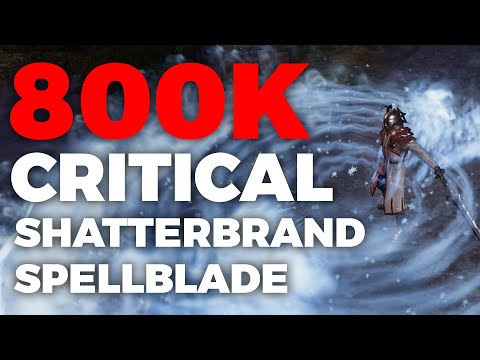 Hey all, this is my first time making a showcase video. I’ve been enjoying this build quite a bit, and after taking a look at the builds in the forum, I didn’t really see any that focuses on Shatter Strike + Firebrand. I’m still relatively new at the game with only 300+ hours, so I thought I’d publish this and hope someone else who understands the game better can pick it up and give it a go.

Transcript of video:
Welcome to a showcase for a high burst damage dual wield Spellblade. The build focuses on the synergy between Firebrand and Shatterstrike, aiming to maximize the Critical Strike Multiplier and Damage Bonuses from Firebrand Incineration stacks. This build is still a work in progress, but is able to clear all standard Timeline Monos without glaring issues.

With these nodes, we’ll be able to achieve an average of 700k critical damage per hit of Shatterstrike for more than 4 million damage on a test dummy, and more than 7 million damage with the right equipment at Lvl 70.

To reach this kind of damage, gameplay consists of stacking 6 Firebrand Stacks to activate Incineration and illuminating Fire, and 10 stacks of Blade Weaving. Once the stacks are reached, the increased Multiplicative Damage is then applied to the entire use of Shatter Strike during Enchant Weapon’s Active Duration. Due to the way Shatter Strike Recasts are coded, the bonuses are applied to all the Recasts as well.

Because of how the damage is applied and how the term High Health works, Shatter Strike will apply the full damage from Cold Presence beyond the 75% stated. Unlike Endurance which applies damage mitigation as soon as the Threshold is reached, Shatter Strike’s damage will not be reduced past High Health. Of course, this only happens if you are using Shatter Strike on a target with more than 75% health. Beyond that, we will no longer gain the +100% Multiplicative damage of Cold Presence.

In most situations besides Timeline bosses, 3-6 stacks of Firebrand will 1 shot anything. With the right setup and modifiers, Timeline Bosses can be dealt with 4-8 Shatter Strike uses.

To further support the build, we spec into Enchant Weapon, Flame Ward, and Surge. Each of these skills have utility for boosting damage and defenses and features standard choices found in many other Spellblade builds. Flame Ward can be tweaked to be more offensive oriented by picking up Through Flames for more flat damage, or maxing out Infusion for increased damage up to +250%. I prefer the extra Flame Ward charge because I am mechanically inefficient and am prone to panic attacks.

For affixes, we are looking to add as much damage as possible.
• Melee Elemental Damage
• Dexterity
• Flat Cold Damage
• Critical Strike Multiplier

Thanks to Illuminating Fire granting us Guaranteed Criticals with Shatter Strike, we do not need to roll Critical Strike Chance into our equipment, freeing up the slot for other damage affixes.

Shard of the Shattered Lance was made for Shatter Strike builds, and dual wielding two of them will give an immense damage boost. Boneclamor Barbute also fits well, and is what I enjoy using thanks to the Dex, Intelligence, Armor and Ward Per Second.

Mourningfrost boots will also add a massive damage boost converting each point of Dexterity into 1 Flat Cold Damage at the cost of defenses.

Due to the Spellblade being able to generate and retain large amounts of Ward, a Low Life build with Exsanguinous and Last Steps Of The Living is possible. I like running with standard defense layers because I identify with being alive and healthy.

That said, the build can be enjoyed without the use of Exalted, Unique, or Set equipment as seen here with all Rare items.

The perfect idols to look for are Gleaming Ornate Glass Idols of Biting, for additional Melee Elemental Damage and Flat Cold Damage.

And that’s all the important information for the build. You can find a link to the Last Epoch Tools build planner in the description. As I mentioned in the beginning of the video, this build is still in progress and has not reached Level 100 or attempted Arenas and Empowered Monos. I play exclusively in Hardcore, so my progression is slower than I like and I am very, very afraid of dying. For those of you who are able to try out this build and are clearly more courageous than I am, I would appreciate it if you can give some feedback by bringing it into Empowered Monos and Arenas. I’ve studied some of the builds that are floating in the official forums, and looking at the damage numbers I’m confident that this Shatterbrand can be taken even further.

I may have gotten some mechanics or interactions wrong, so for the more experienced players out there I highly value your input and corrections.

I play regularly on Twitch from 8pm - 1am GMT+8, so come and hang out and shoot the shit

Thanks for the guide build looks really cool

Thanks, I’m almost done going through all the Empowered Monos and hitting Lvl100 and will be making some updates soon.

Grats for the build and great guide.
It is still viable for 0.8.2 ?

I just had a run in the empowered monos, difficulty is much higher now and things are way sketchier. Damage is still there, but can be hampered by the new High Health Enemies Take Less Damage modifiers. Survivability needs to be tuned, am looking into it.

Skill trees and passives are the same, some idol adjustment needed since the entire inventory was overhauled. The new swords with the +75% crit multiplier implicit though, those are insane for this and easily pushes my dummy swings to 1.2 ~ 1.3 million.