I could get to Arena wave 89 and farm level 100 Monolith on SSF with quickly put together gear. And it’s able to keep Reaper Form up 99% of time, it’s also allow versatile gameplay because you can stay at range or get very close, and still do damage in both situations. 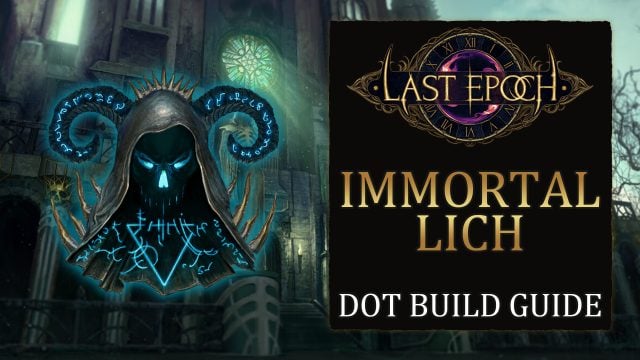 n this Last Epoch Guide we're going to be covering a Lich Build that focuses on the use of several Damage Over Time skills to build huge Poison and Necrotic damage stacks. Last Epoch has very ...

Awesome build! Just respecced & excited to see where this will take me. I’m level 75 & crushing Monoliths.
Thank you!

why so many points in Passive skills with minnion stats?
u have 8 in stolen vitality and 8 in bone armor,is it only for the main char and not minnions?

Bone Armor is good place to start, it gives 120 Armor for myself, and the alternative is inferior (Intelligence doesn’t scale most damage over time, and if does in some skills, it only adds 4% damage per point)

But theory aside, I tested Blood Aura, had allocated for many levels, and when I respec it to get more Armor I felt no damage decrease. That testing on Training Doll … Same with “Three Plagues”, removing 9 points from it made me not really lose any noticeable damage.

(Intelligence doesn’t scale most damage over time, and if does in some skills, it only adds 4% damage per point)

Every skill you’ve chosen is affected by int which will buff any ailments proced by those skills. So for you, it will scale all damage over time plus all hit damage.

Edit: there’s also the Chimaera’s Essence ring which has some nice stats on it for a transformation build. Specifically the 100-160% increased damage while transformed is a global modifier so will affect your dots as well (though it might not appear on the character stat sheet) and adds movement speed while transformed at the cost of a reduction to armour and protections while transformed.

ok thx for reply,
it does show in character stat sheet and its an amulet:)

Yeah, that’s what I meant…

This Amulet is a nice addition to any Reaper Form build, thanks for mentioning it.
Planning around Unique items though would make build less SSF friendly, I did it entirely on SSF

This is absolutely true, though IMO unique should probably go in an “honourable mentions” per slot, especially the more common ones. Just to make the player aware of what uniques can be used if they have them already or find them.

Hi. I am playing this build right now in HC. I am level 33 and its really strong, but i have a hardtime understanding how reaper form works? Where does the life leech come from? and thanks for the guide!!

Lich gets 1% leech as part of it’s mastery bonus, plus he’s taken 8 points in Survival of the Cruel which gives 4% spell leech & 5 points in Soul Maw for another 5% leech for a total of 10%.

What don’t you understand about Reaper form? It transforms you into Reaper form, which effectively gives you a second life pool (since if you loose all your life while in Reaper form you just transform back to “normal” with full health).

Thanks for the explaination!!!

I am having a blast through the campaign its really strong!

Life leech comes from mastery as @Llama8 explained. While healing comes from Aura of Decay skill (Absence of Life node) which heals 8% of missing health every second, multiplied by “healing effectiveness”… so the more health you lose, the stronger this heal become.

It keep growing until the decay from reaper Form becomes so strong you can’t keep up without constant life leech, then it grow even strong that it just drain your whole second life bar and you return to your normal life bar.

Also, generic “life regeneration” doesn’t work in Reaper form, so we ignore this stat entirely, and focus on healing effectiveness and life leech

That makes a lot of sense. I started this build as my first play through a while ago and paused waiting for the loot filters. When I picked it back up I thought it was a little odd how much damage I was taking. I still managed to finish the campaign with this build. I’ve been trying to think about how I can modify it a bit now though.

I haven’t tried this build after last patch yet, but I’d stack lots of poison resistance Armour and “less damage over time taken” on Idols. Also huge poison resistance buff while having aura of decay on idols as well.

Before patch, the poison damage taken was so trivial, I countered it with ward gained per second from off hand. So it didn’t really make Reaper Form depletes faster.

I’ve not tried it, but from what I heard it’s “holy ****” levels of damage taken if you leave it up with the likes of Icarian Poison & the other poison frequency nodes… You might need to counter that with as much “less DoT damage taken” as you can from idols & an Orian’s Eye, etc. Absence of Life can counter that a bit as well. But I don’t think that the devs intend it to be up all the time if you take all of the damage & frequency nodes.

My build never taken self frequency nodes, as poisons from Aura of decay itself is less important than Wandering spirits anyway. I built Aura of Decay in this build in more utility than damage.

I’ll try it and get back to you guys with a clip or two.

If you’re not going balls to the wall on DPS then it may be ok. I did a quick test at the weekend on the Absence of Life node & that stabilised my hp at around 50% (no gear, no other nodes on AoD, etc).

You might want to have a bit of a play with the Fume Weaver node, since that lowers mobs poison resist by 1% per point of Int (at the cost of it also lowering your own poison resist) so that should be quite a nice buff for your Wandering Spirits damage if you can keep your poison resist capped, as I assume it works like shred rather than penetration.